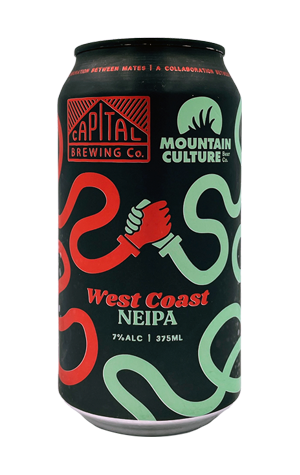 You'd be hard pressed to find two Aussie breweries more suited to working together than Capital and Mountain Culture. It's not just that both head brewers hail from the US, that they're relatively close geographically, or that both have found success with hop forward beers. The lives they and their teams live outside the brewery, the outdoor lifestyles both celebrate through their brands – and have done from day one – are totally aligned too. And it was amid mountain rides and beer festivals that this collaboration took shape.

If you attended GABS earlier in the year and tried Capital's KC IPA, it was the prototype for this beer, an West meets East Coast celebration of Capital brewer Wade and Mountain Culture founder DJ's respective US heritage. The hazy IPA is based around a hop out of the US so new it hasn't been formally named yet – still going by HBC 630 – and it's a variety that ticks many of the boxes so loved in hoppy beers these days.

The tweaking carried out on the original KC IPA in the Blue Mountains before this version was canned as West Coast NEIPA in Canberra have delivered a beer that's the supremely drinkable modern IPA you'd expect from such a pairing. Aromas of fruit salad with a dollop of cream swirled through it pave the way for the smoothest of experiences: full-bodied and juicy yet with a feathery softness and just a lick of balancing bitterness around the edges.

Is it more West Coast than East Coast, or the other way round? Who cares. Just make sure you pick up a few so you can make perfectly sure you don't care either.