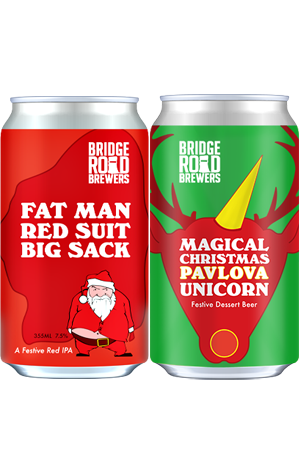 When we wrote up last year’s iterations of these beers, we gave false health information within the first eight words of the write-up. We apologise for any damage caused. We are in the process of firing the writer responsible,† and will do our best to avoid blunders like this in the future.

This yearly release is one of the anchors of the style in the Australian market. FMRDBS isn’t exactly the same beer as it was in 2014. It’s not even exactly the same beer as last year – Bridge Road have “reduced the malt and upped the hops making for a dry, lean and more-ish beer”, which may cause some malt lovers to lament as they grieve the loss of the chewy toffee character. But don’t fear: this beer is still very much Fat Hops, Red Malt, Big Flavour. A hop bill of Galaxy, Vic Secret and Enigma hits hard with tropical fruits and pine, and a touch of rhubarb as a slight earthiness joins forces with the piney bitterness. And the malt flavours still keep you company like the pitter-patter of a dishevelled St Nick on the roof.

In a similar vein, the Magical Christmas Unicorn is back with a vengeance, but also with a difference. Where it’s been described as a vanilla ice cream beer in the past, this year it’s evolved into a pavlova beer – still creamy vanilla, still sweet as all get-out, still a lovely body without turning into syrup, but there’s now also a tang of passionfruit to add an extra layer of flavour. A festive dessert beer fit for an Aussie summer.

†As the writer of those words is the founder and owner of Crafty Pint, firing him is proving to be a lengthier and more difficult process than anticipated. Bear with us.

††Though if they do ever manage to get rid of him, I might have to hit them up to find out how they went about it.