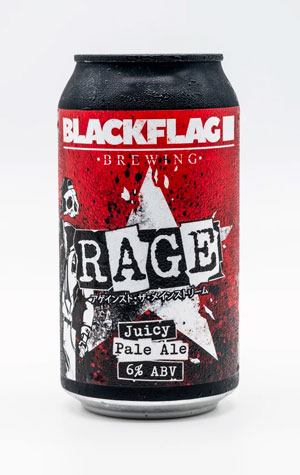 Despite the name, it’s really hard to be mad at this beer.  Drinking it didn’t make me think of crooked arms deals, eating the rich or the military-industrial complex – not even once. In fact, if it were a track from its self-titled album, I’m sure Triple J would have it on sufficiently high rotation.

Blackflag’s Rage Juicy Pale is a likeable and juicy pale ale that’s decidedly lush in the mouth and slightly sweet. Hopped with El Dorado, Azacca and Citra, Rage smells and tastes like a great big pile of ripe sweet fruits and citrus. It’s low on bitterness, juicy and, frankly, I’m not sure what Zach de la Rocha would make of it.