Down a dusty alleyway off Mooloolaba’s busy Brisbane Street – only steps from the shimmering surf – hides a small window set into a timber-clad shed. This square portal, which is otherwise completely unremarkable, plays an important, if unlikely, role: it’s Blackflag Brewing’s takeaway counter.

What’s more, it houses the brewery’s pilot brew system and, taken in conjunction with the epic floor to roof street art filling the venue that awaits beyond, is also the brewery’s reminder that the image of the Sunshine Coast you might have in your head – pressed linens, collared shirts, no thongs in the club after 6pm – is not an entirely accurate one.

Opened in 2019 by a crew of locals, Blackflag have been brewing, chewing and spewing out beers that speak to the owners’ love of punk, metal, skateboarding and art. The brewery’s founders come from all walks of life and include, among others, hospitality veterans Steve Barber and Ben Baker, artist Ross Holloway and brewer Simon Grasby. But they are united because, as Ben puts it: “The crew behind Blackflag are misfits. You’ve got some punk rockers, some skateboarders, but we're all just here to enjoy it.”

In a short space of time, and despite COVID-19, the team behind Blackflag has kept true to its inspiration and brought an energy to its craft that would make Henry Rollins stop for a breather. The crew’s approach to beer festivals, for instance, is if not completely unhinged then something close to it, and includes notoriously taking an entire half pipe with them to the Brisbane GABS Festival in 2021.

When asked how they managed that, Ben says, matter-of-factly: “We just called GABS and asked if we could take a half pipe in. At first they were not so sure but, after talking it over, we made it happen.”

There are two notable things about Blackflag’s approach to their beers. The first is the team’s preference for and brewer Simon Grasby’s ability to make each of the beers – in the words of the team – “smashable”. Everything from the mid-strength session ale to the 7-plus percent black and red IPAs in the core range are terrifyingly sessionable.

Ben says the intention is to brew things that are “super tasty and very sessionable. The kind of thing that on a hot summer’s day you can smash back.”

The second thing you’ll notice is the brewery’s attention to and knack for making award-winning can designs. This is thanks to the in-house artist and co-owner, Ross who, with a background in tattoo and street art, has brought Blackflag notoriety; one of their cans placed in the top three of the 2021 GABS Can Design Awards after making the top ten a year earlier.

As for the Mooloolaba venue itself, what you find down that dusty alleyway is a lively space in which Ross’s bright artwork covers the walls inside and out. There’s a long bar that looks like its been clapped together from the wreckage of an 18th century pirate galleon. Outside, it’s laidback, tropical and at night lights up with twinkling fairy lights.

And while the crew have been contract brewing and making their beers on other brewers' setups since opening, at the time of writing they were embarking on a major expansion that includes a serious new brewery and taproom further north on the Sunshine Coast in Coolum.

Tell a mate about what’s on offer – great music, smiling staff and cold beer served up in a space that’s pleasant, welcoming and friendly – and they might think you were talking about countless other venues in the region. But they’d be wrong.

Down the end of that alleyway, among the swaying palms staring you in the face, Blackflag awaits, devil horns held aloft: the black heart of the Sunshine Coast.

Launching a brewery as the country is about to be hit by a pandemic isn't ideal, but the team behind Mooloolaba's Blackflag have been taking stock while continuing to knock out beers and sling cases from their hole-in-the-wall.

The floods in South East Queensland and Northern New South Wales have caused all kinds of devastation. Here are some of the beer businesses that have been affected.

Blackflag Brewing's production brewery and taproom in Coolum Beach is a big step up from their Mooloolaba alleyway venue, with space and demand to expand almost immediately. We got in touch as it opens to the public. 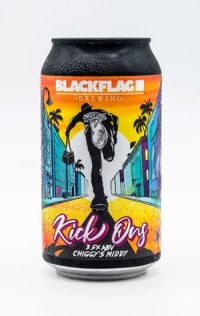 You might know this beer by its label. A lad skates down an empty street, balancing a four-pack of beers on one arm, into an enormous setting sun. Where the lad is headed is a mystery, the provenance of the four-pack unclear. Whether the lad is coming home, heading out or is simply looking for another rail to mercilessly grind, who’s to say. Either way, there’s enough potency in Ross Holloway’s image for it to have the punters whipped up into a frenzy and see it place second in the 2021 GABS… Read more
Golden Yellow 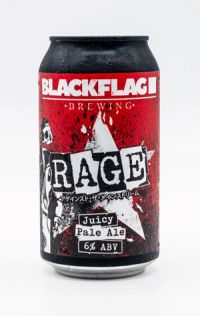 Despite the name, it’s really hard to be mad at this beer.  Drinking it didn’t make me think of crooked arms deals, eating the rich or the military-industrial complex – not even once. In fact, if it were a track from its self-titled album, I’m sure Triple J would have it on sufficiently high rotation.  Blackflag’s Rage Juicy Pale is a likeable and juicy pale ale that’s decidedly lush in the mouth and slightly sweet. Hopped with El Dorado, Azacca and Citra, Rage smells and tastes like… Read more
Golden Yellow 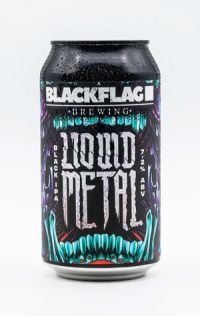 Like many of Blackflag’s beers, Liquid Metal is deceiving. All signs point to this beer being a beast and, for the most part, black IPAs weighing in above 7 percent ABV are not the most sessionable of beers. Then, of course, there’s the name, which conjures up the unsettling possibility of drinking mercury. Sure, it's darker than the inside of a cow but without a doubt and despite all these things, Liquid Metal is sessionable. There’s a big, old whack of fresh pine and citrus thanks to hopping… Read more
Black 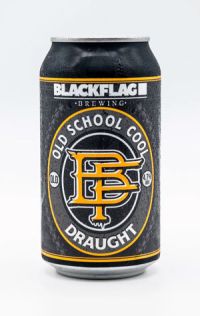 Some things are best relegated to the dustbin of history: cut-off shorts, glam metal, men’s and women’s leather studded belts are first to mind. Other things slip out of fashion and just need a bit of work to restore their glory. Blackflag’s Old School Cool Draught is the brewery’s contemporary take on the not-so-long-ago shunned style of the craft beer world: lager.  Old School Cool has the bones of its predecessors: it’s clean, dry and crisp. But like a son who turns up to Christmas… Read more
Golden Affinity is all about the colours. You may be thinking, ‘But all of Blackflag’s label artworks contain bright colours.’ That’s true. But while most of them use a couple of key colours and contrast those colours with a heap of black, Affinity has more of a kaleidoscopic feel to it. Less graffiti grunge, more expressive tattoo. And the more you look at it, the more intricate details you notice. The explosion of colours on the label is mirrored by the explosive fruity character of the beer,… Read more
Pale Yellow Can we just geek out on this kickass label for a sec? Even with the rich tapestry of can art that you see in the fridges of bottle shops, this one stands out. Neon pink and neon green draw the eye, and the picture itself certainly holds your attention. It’s like Terminator, Blade Runner, Tron and Mad Max all got together and had a very maladjusted baby. Ross (co-owner and artist) freakin' nailed it. The beer ain’t half bad, either. As soon as I tasted this, the descriptors that came into my mind… Read more
Golden Yellow It’s not every day that tipsily googling your own name results in something nice. This is unless you are the folk at Blackflag Brewing and doing so leads to something a bit unique and magical: a beer brewed in collaboration with brewers who span three continents and are linked solely by having the words black and flag in their name.  During the COVID-19 pandemic, a drunken email – sent out of curiosity and boredom – by the folk at Blackflag on the Sunshine Coast to their namesakes in the United… Read more
Golden Yellow 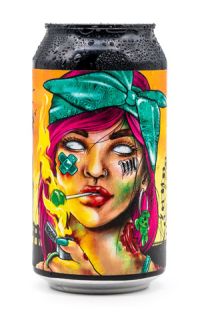 If there's one thing you should know about Blackflag Brewing, it's that they don't tend to trade in subtlety. Case in point: they dragged an entire halfpipe down the Bruce Highway and installed it at the 2021 GABS Festival in Brisbane. And Drop Dead Gorgeous, the latest beer in their limited series range, is no different. A 7.1 percent ABV West Coast IPA, it sits comfortably alongside the many others in the brewery's lineup best described as "dangerously drinkable". On the nose, there's… Read more
Golden