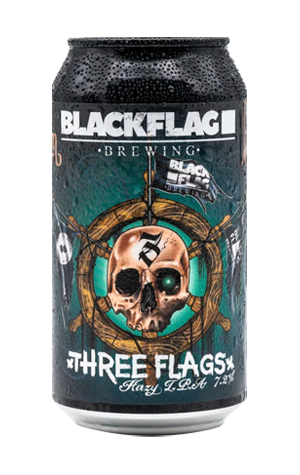 It’s not every day that tipsily googling your own name results in something nice. This is unless you are the folk at Blackflag Brewing and doing so leads to something a bit unique and magical: a beer brewed in collaboration with brewers who span three continents and are linked solely by having the words black and flag in their name.

During the COVID-19 pandemic, a drunken email – sent out of curiosity and boredom – by the folk at Blackflag on the Sunshine Coast to their namesakes in the United States and Spain was not only welcomed but followed by a time zone-confounding Zoom call. Finding more in common than they expected – despite language barriers – a beer was born: the accurately named Three Flags.

The recipe was designed by the Maryland-based Black Flag Brewing Co and then was adapted by the brewers on the Sunshine Coast for local conditions. The result is a hop heavy hazy IPA – the kind apparently favoured by the US-based brewery – but brewed with Simcoe, Mosaic and Rakau. There’s a ton of hops in this beer because it’s got a strong pine and resin – almost dank – aroma and there’s a knockout level of juicy stonefruit. There’s some bitterness to the beer which gives it a little bit of a straightforward IPA nature too.

Despite the best efforts of the dark and spooky pirate skull on the can, there’s something very good-natured about this beer and the way it came about.