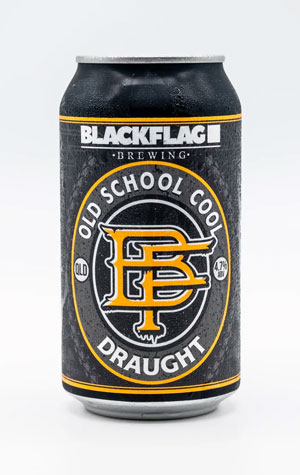 Some things are best relegated to the dustbin of history: cut-off shorts, glam metal, men’s and women’s leather studded belts are first to mind. Other things slip out of fashion and just need a bit of work to restore their glory. Blackflag’s Old School Cool Draught is the brewery’s contemporary take on the not-so-long-ago shunned style of the craft beer world: lager.

Old School Cool has the bones of its predecessors: it’s clean, dry and crisp. But like a son who turns up to Christmas dinner with a sleeve tattoo, the brewery’s blown a bit of life into a new generation of the style. Most noticeably they’ve done this by liberally dry-hopping the beer so there’s an abundance of tropical fruit on the nose. It’s an undeniably light-bodied and refreshing beer but with some rounded bitterness and hop qualities in the mix, it’s a beer for the times.