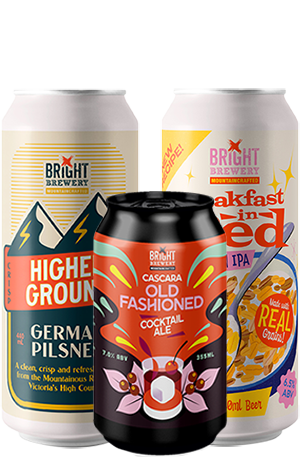 Bright Brewery certainly aren’t slowing the release schedule down for 2022, releasing three beers in close succession barely a month on from their first trio of the year. First up is the High Country brewery's entry into the world of big, tall, traditional pilsners: Higher Ground is a German pilsner made with a mix of noble hops and German malts, then lagered at zero degrees for weeks. The result is a beer that pours a slightly hazy golden straw colour with a perfect white head and high carbonation. Flavour wise, you'll find bready and biscuity notes, grassy and herbal touches, and a crisp but bitter finish. Pour it into the tallest glass you have and if you aren’t mentally there already, picture the highest points of the High Country.

Cascara Old Fashioned might not be follow the same traditional approach to brewing but it is inspired by the world’s first cocktail and follows the brewery’s own recent tradition of creating cocktail beers. The malty amber ale has been blended with a whisky barrel-aged beer before dashes of orange peel, cascara (coffee's outer skin) and orange peel were added. There's quite the dose of cascara present to taste, which comes across somewhere between cherry and marzipan, with zesty orange and warming whisky hits of peat and vanilla completing the picture.

Which brings us to the final release in the trio, one that doesn’t follow any tradition aside from the notion that breakfast is the most important meal of the day. Breakfast in Bed is a “multigrain IPA” featuring barley, rye, wheat, spelt and oats, which lend it a deep orange colour and provide rich elements of biscuit and a toasty finish. It’s not just about those five malts though, with American and Australian hops throwing out substantial hits of coconut and papaya, not to mention creating a bitterness providing balance against the sweetness.