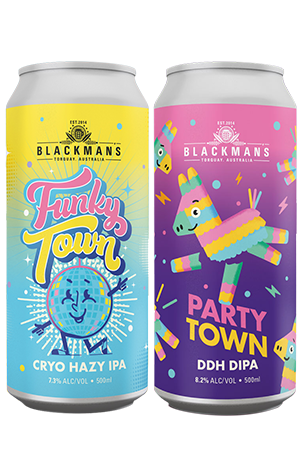 Blackman’s Brewery have released IPAs hours after they’ve been packaged, regularly showcase the wide world of hops with their Needs More series but these twin hoppy releases represent a different kind of release for the brewery. Funky Town and Party Town are the first double drop from Blackman’s and both 500ml cans are big and bold showcases of a wide mix of hops. In the case of Funky Town, it’s the smaller of the two at 7.3 percent ABV and the Cryo Hazy IPA features a range of different favourites from America in the shape of Cryo Pop blend, Citra Cryo, Sabro and Strata. It means there’s a real mix of flavours to sink your olfactory system and palate into and, much like the disco ball on the label, each time you go back into the beer, flavours seem to be coming from a different direction. First up are vibes of pine, then it's plenty of citrus in the shape of fresh orange juice, passionfruit a varied selection of tropical fruit and just a touch of bitterness to help balance out the smooth sway of Funky Town.

Party Town meanwhile is a 8.2 percent DDH DIPA which again uses Cryo hops in the form of Mosaic which is joined by Galaxy, Simcoe and El Dorado. Keeping with the previous analogy of label designs, it's safe to say those hops burst out of Party like a pinata, with a very oily grapefruit and resin notes, pineapple, mango all crashing down on your palate at once.