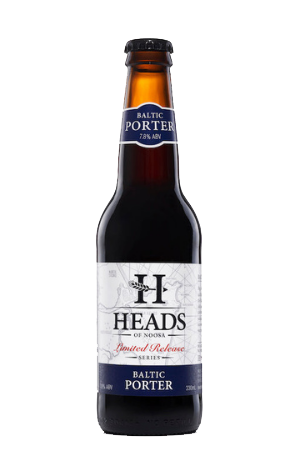 Private launch parties, VIP pre-sales and sold-out events… this is the language of exclusivity tied up with Heads of Noosa’s Baltic Porter. It’s the first beer in their limited release range, and the 3600L batch (a limited volume indeed, when you’ve seen the size of the towering fermenters at the brewery) has struck an instant chord with punters.

When you first pour it into the glass, it’s deep and dark, and the brown that tinges the head only adds to that. But hold it up to the light and you’ll see it shine with hues somewhere between maroon and candy apple red - a nod towards the complexity you’re about to taste.

So many Aussies equate ‘lager’ with ‘smashable’ - and of course, the Heads of Noosa crew pride themselves on the sessionability of their core range - but the Baltic Porter is one to sit with for a little longer. The malt notes on the nose express as cola and chocolate and suggest this is going to be thick and sticky but the cola and chocolate ease away as you start to sip. Instead, there’s a subdued sweetness of raisins, with perhaps just a drizzle of caramel syrup. A touch of roast flavour swirls around the edges as the beer warms in your hands, but it’s entirely smooth without a hint of harsh bitterness.

This is a beer that caresses you from start to finish, drinking with a silky softness like you’re sinking into an overstuffed leather armchair.