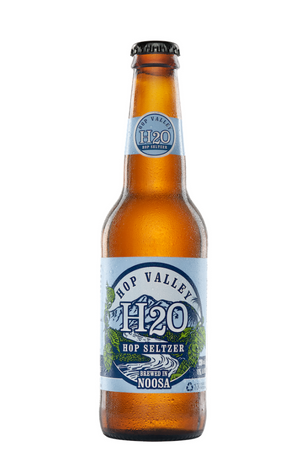 Some beers contain all kinds of other ingredients as well: fruit, spices, coffee, chocolate, vanilla, nuts, lactose, other sugars… anything a brewer can get their hands on.

But this isn’t beer. It isn’t even non-alcoholic beer. It’s sparkling hop water, and it contains two ingredients: hops and water. That’s it.

You might think fewer ingredients makes this an easy product to make. You’d be wrong. Ask any brewer and they’ll tell you that just putting hops into water doesn’t make a tasty drink, but a bitter sludge. But the Heads of Noosa crew have spent ages getting this sparkling drink just right, trying out 14 hop combinations and playing around with the hop oils until they got a product they were happy with.

“We built Hop Valley Seltzers on the back of an excessive amount of R&D, which never ends. The blend of hops we use is kept a secret (even internally!) and has been tweaked countless times as we search for other varieties that work, which are few and far between!”

The seltzer itself pours crystal clear with a slight green tinge. When it comes to the hop character, different people pick up different notes – some get passionfruit, some get elderflower – but it gives you the impression of scooping up a handful of fresh hops, both in the aroma and the flavour, down to the very last sip. I was more impressed than I was expecting to be.

You can drink it in the morning. You can drink it with lunch before getting back to work (it’s a favourite of Heads of Noosa staff during break times). You can drink one (or two, or three) immediately after exercising, and it won’t undo your hard work. In fact, it’ll actually hydrate you.

It’s water and hops. (And carbon dioxide, if you’re counting that.) And it’s refreshing, and it’s tasty.