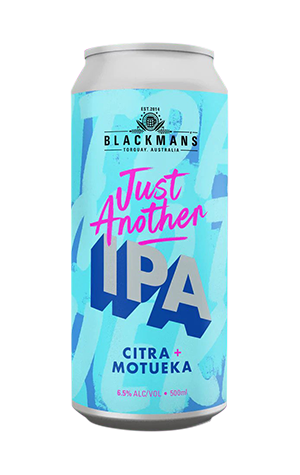 Blackman’s Same Day IPA have long championed hops and freshness but in 2022, the super-fresh beer drop has been used to showcase unusual pairings too. Just in case you’ve missed the long-running series: as the name suggests, Same Day IPA sees the Victorian brewery package an IPA very early in the morning and get it to retailers straight away so hop lovers can enjoy the beer as fresh as possible. Just Another IPA meanwhile, is about hop combinations aren’t seen all that often, with the first in the series being the trans-Atlantic partnership, Citra + Motueka.

This first release feels like one that’s very true to the Blackman’s ethos too, with the 6.5 percent ABV a bold, bitter and punchy beer being one that tips its hat to America's West Coast. Those two hops are more than just punchy too but also incredibly fragrant with big hits of lychee, gooseberry and further tropical fruits joining a touch of spice, zesty lime and grapefruit rind.