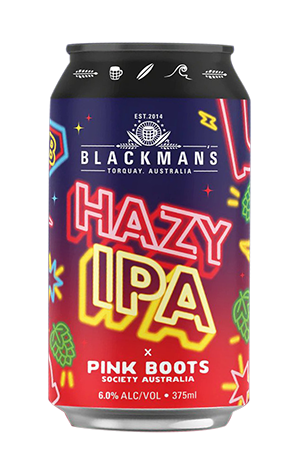 It feels like Pink Boots Society Australia have been in a constant state of collaboration in 2022, with the not-for-profit spending much of the year making beers to celebrate their tenth anniversary. Hazy IPA was brewed with Blackman’s Brewery, with the brew day on the Surf Coast recognising the superheroes supporting women working in the beer industry and having courageous conversations.

The heroic hazy is filled to the brim with the current Pink Boots Blend from Yakima Chief Hops, which features Idaho Gem, HBC 630, Talus, Triumph and Loral. They're the kind of hops that can do wonders in a lush and smooth IPA and this beer is as dedicated to the flavours of that blend as it is to superheroes. It's quite a wide mix of fruits too with peach, white nectarine, pineapple, papaya, lime and berry all combining in combining to make for one fresh and juicy collab.

If you're reading this in time, Blackman's Brewery Geelong is hosting a launch event on August 19 - you can find the details here.