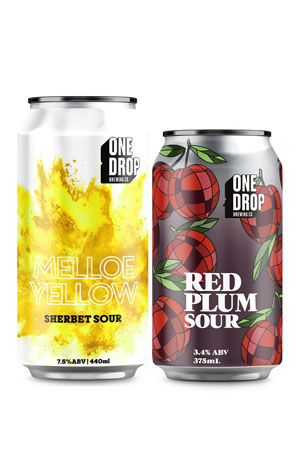 When you are privileged enough to have the opportunity to taste a lot of different beers, occasionally a cool thing happens where one unlocks a strong memory association with something that happened decades ago. This kind of phenomenon is a well-studied area thought to be a byproduct of millennia of human evolution where it would be a great benefit to be able to easily remember which foods were nice and good and which foods would have you rueing the primitive state of indoor plumbing technology.

I mean, I wasn’t smashing a lot of DDH DIPAs as a child so this only really happens with silly beers. So it probably won’t surprise anyone to learn that it happens most frequently with One Drop releases.

Weirdly enough in this instance, their new Red Plum Sour invoked a memory that contained absolutely no red plums at all. Pouring out this 3.5 percent ABV fruited Berliner weisse sent me straight back to the mid to late 90s. It’s one of my sibling’s birthdays and, as is tradition, we’re at the Cleveland Sizzler for a very special dinner. I’ve got a gut full of cheese toast and now I’m very carefully creating the perfect combination of Fanta, Solo and red creaming soda so it’s the precise shade of red/pink that I’m sure is the most delicious drink in the world. At some point, one of the drink corporations will send a flavour scout (this is definitely a thing that exists) to my Sizzler and I’ll be whisked away into the high stakes world of being a soft drink genius.

What’s in my memories is the exact colour of this beer. I’m also pretty sure my brain is playing tricks on me but it smells exactly like it too: plums, strawberry and a sweet, generic fruity tartness. The body is light and leaning heavily on a wheat malt base with a moderate acidity and a lolly-like fruit flavour. It’s delicious, and leaves plenty of room for the all-you-can-eat dessert bar.

Their second and last special release for August is Melloe Yellow. Following on from the Orange Sherbet sour earlier this year, One Drop have replaced the orange juice with a veritable tide of pineapple juice and purée.

Opening a can of Melloe Yellow is like being taken on a VIP tour of the Golden Circle cannery. Aromas of freshly peeled pineapple and lemon peel burst out of the glass. As if just to prove that One Drop are using plenty of actual pineapple in this beer, there’s still plenty of bromelian to give that prickly, mouth shredding sensation along with a boatload of citric and lactic acidity. I really like the way the post-ferment additions of lemon and lime rind give a lasting lemon/lime finish. It really adds an extra dimension to an already chock-a-block beer.