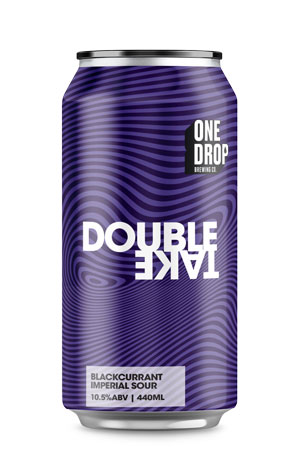 It’s Double Take time again, folks! No more waiting around to find out which fruit is no longer available at the grocer because One Drop bought it all. It’s bad news for all you currant-heads out there because every available blackcurrant in the country has been press-ganged into this beer.

Four hundred and twenty. It’s not just the funny weed number, it’s also how many grams of blackcurrants were rammed into every litre of Double Take. For reference, for a long time the Cantillion-fruited lambics were considered some of the most fruit-heavy beers in the world and even those were rarely dosed with more than 300g/l. By One Drop’s reckoning, there’s 142 blackcurrants in every 440ml can. Abject insanity.

Every single one of those blackcurrants shows in the gorgeous colour. It’s vibrant like a carbonated Ribena juice and smells like a fruits of the forest muesli bar. Assuming the muesli bar was also dipped in Ribena. No surprises to guess that this mostly tastes of blackcurrant but I also get a high school flashback to sour grape Zappos and a sort of savoury moreishness. It’s a mouthwatering tartness that accentuates the fruit and does a marvellous job of hiding the very high ABV. Pretty cool how they’ve taken a beer that should have been a one note gimmick and given it genuine complexity.