Beer Beerland Brewing The Walking Red, 1872 & Thick As A Brick 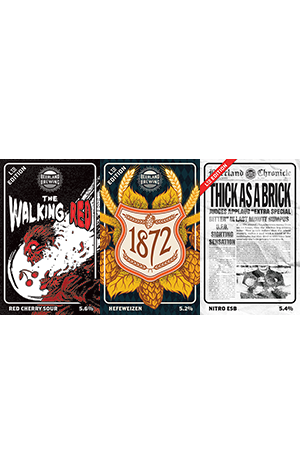 Who fancies finding out what resurrection tastes like? The Beerland brewers wanted to create a Flanders-inspired red using a different strain of kettle souring bacteria that's heterofermentative – read more about its first use in an Aussie beer here. It produces small amounts of acetic acid along with the more common lactic acid for added complexity. Resurrect a barrel-blended beer from a few years ago that didn't see the light of day, throw in 100 grams per litre of cherry purée and you have yourself something very special.

Vienna malts layered with several specialty malts create The Walking Red's dark, blood red hue and bring plum, sultana and biscuit flavours. The cherry supports the malt character by accentuating the dark fruits in a manner reminiscent of the beers of Rodenbach. There's complex acidity, plus hints of chocolate and balsamic to finish things off on the palate. Fight the dead, fear the living. An eye for an eye! Sometimes bringing back the dead is not such a bad thing.

With their new hefeweizen, you may well ask: "Why 1872?" Well, it was a milestone year for the style sometimes tagged "the original hazy" – it was when the Dukes of Bavaria gave up their monopoly on wheat beers and sold rights to George Schneider of Schneider Weisse fame. Focusing on the characters derived from the traditional yeast strain, Beerland – whose first AIBA Champion Australian Beer title came for their Wheat in 2018 – have created a beer in which the first thing that comes to mind is bananas, which in turn sends my mind automatically to that Gwen Stefani song. Bubblegum and cloves are present too, however the banana aromas and flavour dominate, while there's a pleasant effervescence from the high carbonation. This sh#t is bananas, B-A-N-A-N-A-S!!

Sticking in the old world, there's Thick As A Brick, Beerland's recreation of English's popular Boddingtons Bitter, renowned for its distinct colour and thick, creamy head. To mimic the feeling of a cask ale without the cask, this ESB comes with a nitro pour accompanying the raft of specialty malts that deliver sweet toffee flavours alongside the beer's dark, fruity esters. East Kent Goldings hops provide the solid bitterness you'd expect, although for me the true magic is watching the beer settle once it's been poured: watching the nitrogen bubbles do their work is mesmerising.

This well-balanced and easy-drinking beer is sure to fire the nostalgia for those who've spent time in British pubs drinking cask ales from handpumps. E.S.B. it's dy-no-mite!

Available now for a limited time from Beerland venues, draught and takeaway CANimals

And at select WA venues and growler stations 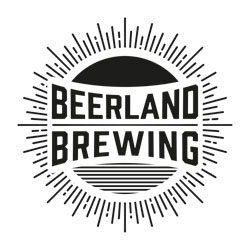