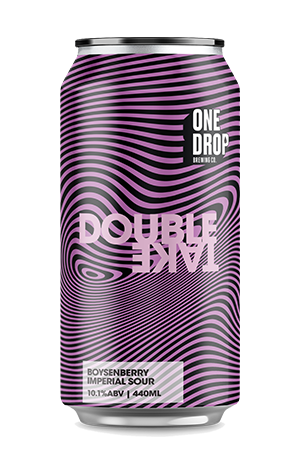 As soon as I cracked a can of this iteration of One Drop's Double Take series, it occurred to me that I have no idea what a Boysenberry is. So, like a bad Jerry Seinfeld impersonator with a keen interest in pomology, I said: “I wonder what the deal with boysenberries is?”

They’re pretty cool as it turns out. Boysenberries are a cross between four different species of the Rubus genus: European raspberry and blackberry, and the American dewberry and loganberry (which itself is a hybrid of a raspberry and blackberry). It’s named after Rudolph Boysen who was one of the first to cultivate the plant on his farm in Anaheim, California. Boysen later abandoned his farm and some vines were rescued by a bloke from the USDA and Walter Knott (of Knotts Berry Farm fame) who saved the vines and began growing the berries on his farm in Buena Park. They soon became more popular than both the raspberry and blackberry until falling out of favour post WWII due to being generally difficult to grow and transport. Weirdly enough, in the 1980s the Kiwis began a serious and ultimately successful breeding program of boysenberries which now sees Aotearoa as the world’s largest grower and exporter of the fruit.

OK, now that we all know a bit more, let’s talk about the bloody beer, hey? Like the blackcurrant version from last month, this imperial fruited sour contains a staggering 420g of boysenberries per litre. It pours like a beautiful chilled pinot noir and at 10.1 percent ABV it’s just about as boozy. Aromas of Hubba Bubba grape, strawberries and fruits of the forest jam bleed into the hint of lactic tang. It also tastes remarkably like a very light pinot noir that’s been dosed with a dribble of berry cordial. The red grape character is bright and juicy and plays very well with the lactic tartness.