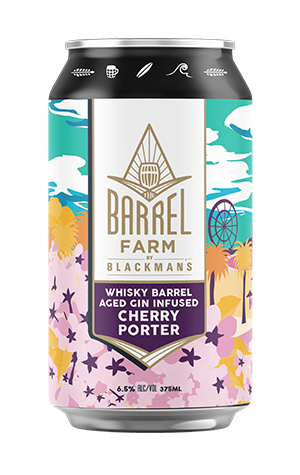 Dark beers and whisky barrels have been brought together countless times and both brewers and distillers love adding fruit to their creations but this release feels particularly special. Blackman’s Whisky Barrel Aged Gin Infused Cherry Porter is part of their Barrel Farm series and as well as being a mouthful to say, is quite a mouthful to drink thanks to its web of flavours. The beer started life as a porter before spending six months in ex-NED Whisky barrels alongside some 100 kilos of Tasmanian cherries which were infused with Anther Distillery's Cherry Gin.

It makes it quite the collaborative effort from three booze makers and the beer itself is soaked with an impressive mix of flavours while remaining balanced to its core. Straight away, the aroma hints at gin being part of proceeedings thanks to distinct botanical notes, including juniper. That botanical touch continues as you drink it but is more of an underlying player and is joined by cherry, vanilla, chocolate, tobacco and a touch of whisky on the finish. If it's that dark spirit that excites you the most then fear not, plans are afoot for a NED Whisky aged on the barrel that once contained this beer.

If you're reading this time, head down to Blackman's Grovedale from 5pm on October 25 to be among the first to try it.