Black Dog has never been afraid to play around with high ABV beers, whether in the form of barrel-aged barley wines, collaborative imperial red ales or imperial stouts. The Junk Yard Dog Double IPA, which belongs in that family too, was debuted at Good Beer Week in 2014 and has returned to see out the year. Brewer James Booth hasn't held back on the hops – even by double IPA standards – packing so many American, Aussie and Kiwi hops into the brew it's registering somewhere around the 140 IBU… Read more
Rich Brown 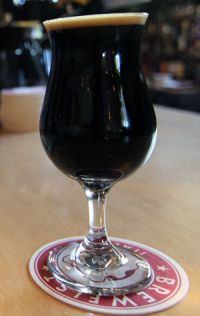 Having helped Melbourne's 3 Ravens to not only its first gold medals at this year's Australian International Beer Awards but also the Best British Ale and Champion Small Brewery titles, head brewer Adrian McNulty decided it was time to take his brewing skills, love of dark music and collection of off kilter headwear to pastures new in the form of Moon Dog. Prior to leaving, he created a farewell beer with his recently installed co-brewer, Ian Morgan (who has since been joined by former Boneyard brewer… Read more
Black They do like to play around with casks and barrels down at Red Hill, with the latest of their oaky adventures resulting in the release of the Double Barrel Temptation. Fans of the Mornington Peninsula brewery will know and love the Temptation, their once-a-year strong Belgian golden ale. They'll also likely know about their even more occasional "Double Barrel" series, which sees them bottle extremely limited amounts of their seasonals aged in oak barrels. Last year's Double Barrel Imperial… Read more
Golden

With the huge, self-inflicted obstacle that was Australia's insatiable desire for Pacific Ale just about cleared thanks to the opening of brewery number two, the brewers at the original Stone & Wood site in Byron Bay have a little more time to play around. Play around or, perhaps more accurately, "sit around in The Rails and talk about beer". Apparently it was one such evening that inspired this twist on Jasper, the red ale that is the third beer in their year round range. Rather poetically,… Read more
Rich Brown

Find it on tap here The term "session IPA" is one that has seen its popularity grow and have its value debated in equal measure since first appearing on the scene. "Isn't it just a hoppier pale or a lower ABV IPA, in which case it's not an IPA?" is the typical starting point for any conversation. Indeed, there have been some examples in which the attempt to get more hops without the balancing malt and booze have led to beers deserving of debate, but the Bantam is one that seems likely to render any… Read more
Rich Brown

In recent years, the Lord Nelson - Australia's oldest pub brewery - has been pouring a growing range of seasonal and one-off beers through its taps in The Rocks. Some reappear every year, others are concocted for a special occasion, do their thing and disappear and, as of a few months ago, every now and again one of them breaks free of the pub and is brewed and bottled on a larger scale and distributed nationwide. First for this treatment was the rather tasty Double Nelson IPA and following in its… Read more
Rich Brown

In bottles nationwide where you find Three Sheets and Old Admiral This beer was originally conceived with beer educator and writer Matt Kirkegaard of Brews News for the annual Media Brew competition at Beervana NZ. It's brewed with golden syrup and oats and plenty of New Zealand Motueka hop in the hopback as a tip of the hat to the 100th Anniversary of the beginning of the Great War and the making of the original ANZAC diggers. Say the people behind it: "We celebrate the friendship between Australia and New Zealand in a far happier light, brought together… Read more
Rich Brown

It might just be us, but there seems to be a bit of a sinister air surrounding the Grifter Brewing Company these days. Following on from their winter oatmeal stout release, The Omen, comes Coven, an amber ale firmly encased within some striking coffin-shaped imagery. The word 'Coven' represents a gathering of witches and it's true you can almost imagine the three Grifter boys huddled around a vigorously overflowing boil, giant paddles held aloft, chanting, 'Double double, toil and trouble!â?.… Read more
Rich Brown Having become increasingly convinced that Nail's founder John Stallwood is Australia's maestro of malt on the back of staggeringly consistently high quality releases such as his Oatmeal Stout, Hughe Dunn Imperial Brown Ale, Imperial Red Ale, Imperial Porter and Clout Stout, we expected this Red Ale to be another exploration of just how much character and depth could be expressed in a beer via the mastery of beer's backbone ingredient. So imagine our surprise when the first thing to hit us as the… Read more
Red

The folks at Young Henrys couldn't be accused of not enjoying a lil' bit o' Yee Haw! Harking all the way back to one of their very first limited releases, the Yippee IA (Imperial Amber Ale), the chaps with the chaps have never shirked away from the opportunity for a Southern-inspired celebration, be it barn dance, hoedown or boot scoot. And now they've gone and developed themselves a Texas-style Red Hop Poker. Originally brewed for the Carnivore's Ball in Marrickville, this is an India Red Ale that… Read more
Rich Brown

In a recent radio interview to chat about our new beer book, the host in Brisbane plucked a few beers from its pages that had caught her eyes for different reasons. Among them was Black Lung, with its eye-catching packaging – a suit-and-tie-wearing skeleton with hole in its skull smoking multiple cigars – prompting a question about the importance of presentation in the craft beer world. Acknowledging that Moon Dog's was among the most visually arresting, we suggested it would only get a brewery… Read more
Black

One of Bridge Road's most popular annual releases is back in its fourth incarnation. The B2 Bomber first took to the skies to mark the brewery's birthday back in 2010. Ever since then (barring one exception) it has been the birthday brew, evolving (well, being beefed up is probably more accurate) each year. It's a melding of styles that takes in black IPA and Belgium, with the former meaning plenty of dark malts and punchy hops, the latter providing a fruity, herbal yeast character. Last year saw… Read more
Black

Clearly Will Tatchell is something of a glutton for punishment - or has a team of eager beavers on hand come packaging day. Because having been inspired to follow the Belgian lead and painstakingly wrap the 2,500 bottles of his Hedgerow Sour in pretty paper, he's done the same with this year's release of his Giblin Imperial Stout. Given many of the imperial stouts coming out from Australian brewers these days tip the scales above 10 percent, this one is a pretty restrained affair; at 7.7 percent… Read more
Black

Young Henrys & Holgate I Should Coco

More Sydney venues to come with some heading to Melbourne

You can tell 3 Ravens head brewer Adrian McNulty is being given free rein in the brewery these days. The man has musical tastes of a particularly dark, intense and heavy shade of black and the creation of beers such as Black Mass ' a whisky barrel-aged chipotle and vanilla porter ' and now this Pedro Ximenez barrel-aged Belgian strong dark ale named Druid would seem to reflect brew days soundtracked by intense aural assaults. Having enjoyed the Druid on tap and from the bottle, we feel that maybe… Read more
Rich Brown

On the night of the 2014 Australian International Beer Awards, shortly after 3 Ravens head brewer Adrian McNulty had collected the trophy for Champion Small Australian Brewery, we asked one of his colleagues: "Does this mean Adrian will be allowed to brew USB again?" The beer ' essentially a souped up version of their English Ale ' was always a favourite at Crafty Towers but, when the brewery was taken over by Mash in 2013 the brewing of all limited release beers was put on hiatus to focus… Read more
Rich Brown