When Coldstream Brewery launched in 2007, the size, shape and character of the local beer world was a long way from where it is today. And, like the roads that lead to the their home in the Yarra Valley, the Coldstream story since then has followed a far from a straight path.

Originally brought to life by five mates, these days two of them – Mike Basset and Rohan Peters – are the drivers of the business today. The pair grew up together in Korumburra and once they'd embarked up careers – one a vet, the other in IT – they regularly took overseas trips together.

It was while traveling in Europe, soaking up both the beer and the culture that surrounds it in Belgium, Germany and the Czech Republic, they started talking about bringing those experiences back home. That idea ultimately led them to an historic building in Coldstream, a small town on Melbourne’s outer edge.

Often referred to as the gateway to the Yarra Valley, the town is also known for its particularly cold winter mornings; it's a situation that makes the area one of Victoria’s top spots for growing brussels sprouts and cabbages. When it comes to the brewery, it's why the Coldstream logo – one of a shivering man bearing all – reflects both the cold climate and the idea of taking a plunge to follow your passion.

The building had served the community well over the years, taking on many forms – tannery, general store, Chinese restaurant, wool shed and, prior to the brewery, an antique shop. The five mates transformed it into their bar and restaurant while, out the back, they somehow made room to squeeze in a brewery that began to supply their taps as well as the small number of bars and bottleshops pouring craft beer at the time the year after they launched.

The core lineup of beers was inspired by those European holidays, focusing on straightforward styles including a Czech Pilsner, Golden Ale, Australian Pale Ale and Grand Porter, with cider an early focus for the operation too.

After close to four years brewing in house, the founders made the call to switch to contracting their beer production elsewhere. It led to Coldstream's beers and ciders starting to appear more widely across the country.

And it's here we get to the far from straight path... They lent that brewhouse to Gus and Phil Kelly from Kellybrook Winery and Kelly Brothers Ciders, with whom they'd been making their popular cider. The brothers moved it to Moorabbin where it was used to launch Riders Brew Co, while Coldstream's core moved to larger breweries. They continued to brew many of Coldstream’s specialty and smaller release beers there too, however, and at time of writing most of them are again brewed in Moorabbin, on their original kit, with Mike and Rohan shifting their focus back to keeping their beer on tap around the Yarra Valley and Melbourne.

That’s not the only change in recent years, either. Whereas once Coldstream’s focus was on the brewery’s core range, limited releases are now a bigger part of their offering. Many make it into cans under the “Shivering Man Series” banner although you’ll only find certain beers on tap at local bars and pubs, often created as collaborations with other Melbourne breweries.

Whether it’s those collabs or the core range, the best place to try them remains in Coldstream itself. The taproom has all the elements of a good pub woven together: friendly service, a relaxed dining room, spacious beer garden, hearty pub fare, pizzas and a dozen taps pouring beer and cider. In the space that once housed the brewery, you’ll now find The Brewery Bar, where there are more taps and a function space.

While the brewery – and the wider beer world – have taken many twists and turns since 2007, and no doubt there are many more to come, it turns out for Coldstream there really is no place like home.

The region might still be best known for wine but today the Yarra Valley offers visits a plethora of food and drink options. It's home to a growing number of breweries and venues where you'll find a few crafties too, so here's our guide to finding grain amid the grapes. 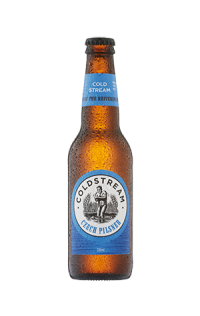 Before Coldstream Brewery was even an idea, co-founders Mike Basset and Rohan Peters spent a lot of time travelling to some of the world’s best beer destinations. The Czech Republic was a particular favourite, with Mike telling us he was so enraptured by the country’s beer and the culture that surrounded it he felt he may be unable to leave. So it should be no surprise that Coldstream’s Czech Pilsner has long been part of the brewery’s core range. Their take on the classic style is mostly… Read more
Pale Yellow It wasn’t too long ago that golden ales felt like a force to be reckoned with in Australia’s nascent brewing industry. It was a style that, at one stage, every other brewery seemed to need in their core range. One golden ale that’s endured is Coldstream's and in part it feels like that's due to the way the beer so heavily leans into tropical territory. Its flavours are driven by Galaxy hops, which really steer the golden and orange-hued beer. Golden Ale’s relatively richness also means there’s… Read more
Golden Yellow So broad is the pale ale style today that brewers have a blank canvas when it comes to brewing beers that wear the title (and that’s before you even start talking about XPAs, session IPAs, summer ales...). For Coldstream, the brewery seems to have mostly looked towards England for inspiration for their Australian Ale. It’s darker than many modern American interpretations you’ll find, with soft floral hop notes sitting atop a rich and slightly nutty malt base that’s supported by a decent… Read more
Golden This beer style was one that filled the public houses of London in centuries past and, while it might not be so widespread today, the porter still feels like a style built to last. After all, combine a rich blend of flavours in a beer while keeping it drinkable and you'll likely find the way to many drinkers' hearts. Coldstream’s Grand Porter is just that, being a smooth beer that’s full of rich chocolate, toffee and caramel and a bitter roasted edge while still remaining highly quaffable. *Will… Read more
Black Coldstream’s limited released Shivering Man Series features beers that take inspiration from the brewery’s logo of a man taking a cold plunge. The beers only tend to make it into bars and bottleshops around Melbourne and the Yarra Valley and aim to explore territory which the brewery’s accessible and down-the-line core range doesn’t. The fourth of these is this a New England IPA, hopped with Citra, Amarillo and Mosaic. It pours with an orange golden haze and brings forward a juicy mix of… Read more
Golden Yellow As well as producing more seasonals, Coldstream have been hard at work in recent times brewing collaborations with local breweries and other producers. In the case of Pale Gin Sour, the beer was brewed with both LittleBrew and Tiny Bear Distillery, both of whom operate in Melbourne’s outer east. Starting out with a hop forward pale, the beer was kettle soured before being infused with a navy strength gin. Upfront the botanical hit is clearest, with a distinct hit of juniper and then lime following… Read more
Pale Yellow