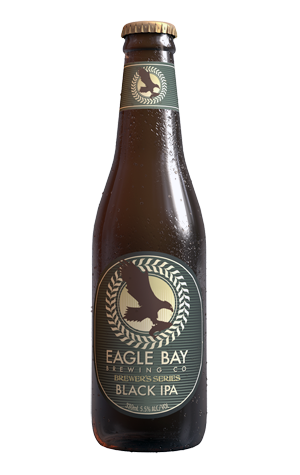 Over the past two and a half years, Eagle Bay's head brewer Nick has been experimenting with single batches that have led to a Brewer's Series. This is made up of four limited release beers in draught and bottle, all seasonally inspired and selected from the crowd favourites from all of the brewery's previous single batches.

For the latest, its autumn release, they brought back their Black IPA. It was in kegs in April and has now been bottled too. The launch was celebrated in collaboration with Toastface Grillah (a Perth based toasted sandwich bar) at Mane Liquor, leading Crafty Pint WA to describe a "lovely balance of tropical fruit and citrus hops alongside toasty and slightly chocolate malts... Whether tap or bottle this is definitely a beer worth seeking out, the dry toasty tropical fruit finish is genuinely moreish." on her girl plus beer blog. The beer is available until the end of June, at which point Nick will be teaming up again with local chocolate making duo Bahen & Co and brewing the Brewer's Series Cacao Stout.