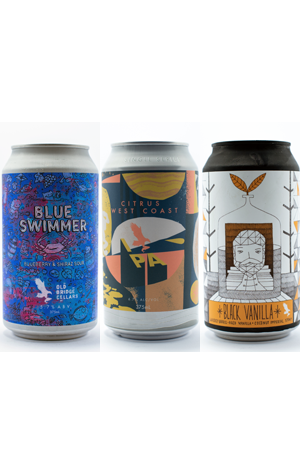 There have been quality releases aplenty from Eagle Bay in 2022 and, deep into the second half of the year, they keep coming. The coastal brewers are proving they have range here, releasing a trio of beers that includes a collaborative blueberry and shiraz sour, a citrus West Coast IPA, and a more-than-robust whiskey barrel-aged imperial stout enhanced with vanilla and coconut.

Starting sour, Blue Swimmer is an intensely fruity offering that features estate grown shiraz grapes and 100kg of locally grown blueberries, plus a stint in zinfandel barrels for added complexity and structure. All that effort amounts to a beer that's robust in flavour but lots of fun: sour candy is a theme where Warheads and sour Skittles might come front of mind. Some sweetness is evident but does wonders to offsetting that sourness, while the mouthfeel is a touch gritty, likely thanks to shiraz grapes that also impart some sweet grape and earthiness.

Hop-driven beers have always been a standout from Eagle Bay, and their Citrus West Coast IPA is on brand. A shopping list of US and NZ hops feature – Citra, Motueka, Southern Cross, Mosaic, Strata – in a range of forms alongside 30kg of citrus zest from the brewery's orchard to yield an IPA that impresses with big citrus characters of lemon, lime and grapefruit plus more tropical notes of ripe mango and pineapple. Some pine persists too, but everything leads into a finish that holds lasting hop character.

Shifting into darker territory comes the return of Black Vanilla. This revered collab with Mane Liquor and Whipper Snapper Distillery that originally landed in 2017 has returned five years later and somehow improved. Six months in a whiskey barrel plus toasted coconut, vanilla and an array of dark-leaning specialty malts have resulted in a complex and impactful imperial stout offering. Tasting great as is, cellaring is an option thanks to the hefty 11.4 percent ABV, but if choosing to drink now expect a contrast of bitter cocoa, and sweet malt characters of toffee and raw sugar along with sweet vanilla, coconut and just a whiff of earthy hops.

The Eagle Bay brewers have been busy, but thankfully their quality matches output with three more noteworthy beers added to their roster for 2022.