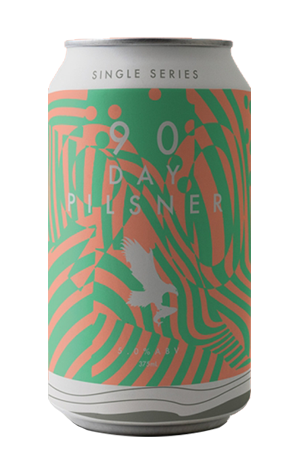 If you were told the lager you were drinking was made the previous year, you might have a few questions for the person serving you, mainly along the lines of: "Do you have anything fresher?" But, for Eagle Bay’s latest single series release – an uber crisp pilsner – they’re boasting a 90-day process that means, according to its January 2022 release date, brewing took place back in spring 2021…

Although historically the turnaround for lagers was typically lengthy – the term "lager" means to store – in modern brewing it’s not so necessary or indeed common, here Eagle Bay decided to play homage to processes both classic and modern. They developed this recipe to include a 90-day conditioning period and a staggered dry-hopping regime that features new world hops Enigma, Motueka and Nelson Sauvin.

The polarity of new and old has worked well, with 90 Day Pilsner presenting a super clean, crisp disposition with a touch of malt sweetness and grainy texture. Some bready, biscuity character is present against fresh citrus – lemon and mandarin – and some earthy notes. Although pouring a pale yellow hue with a light body, malt character is surprisingly evident here – and needed, too, against firm hop character.

Eagle Bay’s latest has one foot firmly in the old world and the other in the new but despite that, or perhaps because of it, this 90-day conditioned, generously-hopped pilsner displays an abundance of flavour while retaining great balance.