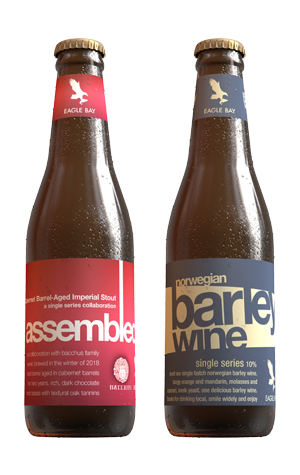 One benefit of the COVID-19 lockdown for WA's beer lovers has been the necessity for Eagle Bay's brewers to put out five beers destined to be keg-only releases in bottles in very quick succession. And, if punters were stoked to get their hands on the limited, single series Dark Lager, IPA and Red IPA, then they might have to take a seat for the latest double drop.

A barleywine with a Norwegian edge and a cabernet barrel-aged imperial stout complete the rapid-fire quintet and, although they’re being released together, there’s not much else in common otherwise between this set of twins, other than their propensity to keep you warm through the cold, wet winter months.

A 10 percent ABV barleywine gets most hearts pumping as is, but the team at Eagle Bay decided that fermenting it with Norwegian "super yeast" kveik might bump things up another notch. That said, while kveik might be able to ferment beers fast and at high temperatures, Barleywine's gestation has been a long one, with the warmth-inducing ale subject to a twelve month conditioning period. The process has paid off, yielding a barleywine void of heat but bulging with rich malt and funky yeast derived characters; fleshy orange, caramel, molasses and mandarin are just a few of the flavours at play here, carried by viscosity and a lasting, slightly bitter finish. The end result is a beer that's decidedly different but cleverly crafted and retains a resinous, sticky barleywine disposition.

The other half of this immense duo is Assembled, an imperial stout lovingly-barrel aged for two years in spent cabernet sauvignon barrels from Bacchus Family Wines in Cowaramup. Brewed back in winter 2018, head brewer Keegan Steinbacher decided this unctuous, good-for-sharing beer was ready to be released into the world for the 2020, although not before a portion of cold-conditioned, non-barrel-aged stout was brewed and blended into tank to elevate freshness and ensure balance. Coming in at 10 percent ABV, Assembled is a carefully curated labour of love displaying intense characteristics of red berries, oak and oily dark chocolate. A thick and lengthy finish is as expected, with a touch of gentle acid and assertive bitterness persisting with each sip.

Both of these beers are designed for sipping and sharing and have been released in collaboration with winter. Big and robust, both are ready to drink now thanks to their lengthy conditioning periods, but you might want to hold onto one or two for enjoyment on a distant rainy day too.