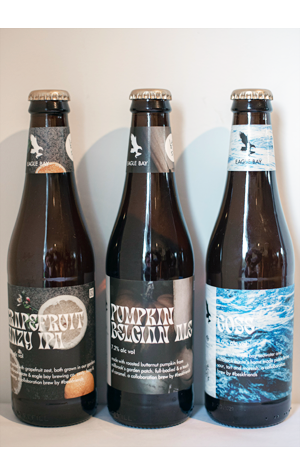 Hot off the heels of their delectable double drop from July, Eagle Bay have released another trio of creative beers that includes a pumpkin Belgian ale, grapefruit hazy IPA, and a pickle juice and sea water spiked gose.

The clever concoctions aren’t entirely Eagle Bay’s doing, however, with all three brewed in collaboration with Besk and Millbrook Winery; the latter supplying the grapefruit, pickle juice and pumpkin used as defining ingredients for the beers. Besk’s Elliot Moore was the brains behind the “Besk Mates” concept, while Eagle Bay’s head brewer Keegan Steinbacher was responsible for developing the recipes and producing the beers, the aim being to design beers perfect for pairing with Millbrook’s food.

Though brewed for joint release, there’s plenty of contrast between the three. Belgian Pumpkin Ale, brewed with pumpkin grown in Millbrook’s garden, is complex with fruity esters, an underlying earthiness, and a touch of well-placed sweetness. The Grapefruit Hazy IPA, brewed with grapefruit from Millbrook’s hundred-plus-year-old orchards, is abundant in zesty grapefruit aromatics and a pithy, lingering bitterness that pairs well with a touch of citric tartness. Rounding out the trio is the uber-refreshing Gose, tart with a muted underlying note of aromatic spice and grass.

Though collaboration isn’t new to the team at Eagle Bay, a three-way collab between an inner-city bar, a winery and a coastal brewery is certainly an uncommon affair. And, much like the concept itself, the trio of beers released in concert are equally original.