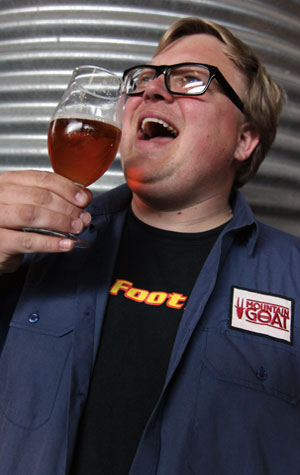 The Crafty Pint may never have eventuated were it not for a cold, dark Melbourne winter's evening when a couple of Brits, recently arrived in Australia, climbed into an old Mercedes outside The Greyhound in St Kilda. It was being driven by a woman who'd told one of them "my boyfriend works for a microbrewery" and had thus opened up the promise of finding good beer Down Under. Said boyfriend (now husband) was Tom Delmont, the larger-than-life On-Road Goat, and walking into the Goat brewery that night was something of an epiphany moment for The Crafty Pint's founder. Six years and one website later, this legend of the local craft beer world has had a beer brewed in his name, his honour and his likeness. Those who know Tom know it could only ever have been one style: a West Coast IPA, and so it is, crammed full of US hops Cascade, Amarillo, Simcoe, Centennial and Chinook.

In The Delmont's own words: "In June 2010 four friends went on a great beer adventure (Colorado, California, Oregon, Washington State, NY) and visited quite a few of the USA's best brewers, including Green Flash, Ballast Point, Stone, Anchor, Sierra Nevada & Russian River among many others. I fell in love with the big, clean hop flavours and the incredible drinkability of the true West Coast IPA or, according to the San Diego guys, the San Diego style IPA. This beer is a direct result of that trip and my last six years in the craft beer industry." As for what it is in the flesh, it's a gleaming copper colour, with plenty of familiar citrus and pine aromas and a slightly resinous bitterness that's there from the off but never gets out of control (unlike its namesake), instead being lean, clean and open to repeat visits. They've brewed heaps so In-Breed bottles will follow the kegs. NB: should you decide to black and tan it with the Crafty Auld Bulgin' Boysterous Bicep, go easy on the latter...

And many other quality beer retailers nationwide