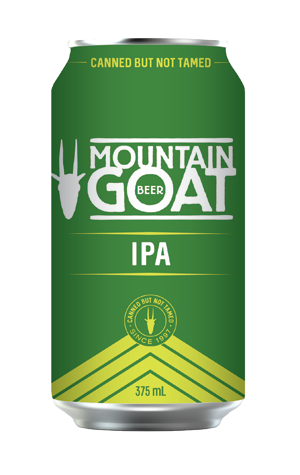 The saga of Mountain Goat's IPA is one of many chapters. Back in the distant past, when they were still fighting to have craft beer recognised as a thing even in Melbourne's inner north pubs, they brewed one – the Organic India Pale Ale. That disappeared when they streamlined to a core range of Steam and Hightail, but they opted for a new IPA to launch their Rare Breed series not long after, with the beer becoming the first of very many IPAs to appear under the Rare, Cross and In Breed banners.

Since then, an IPA has been introduced then removed from the core range, while they've collected a couple of trophies for limited release IPAs along the way. And now, in a case of third time lucky, there's a green-liveried IPA back in their core range once more. It's an evolution of the North Street IPA they launched at the Richmond HQ and a far cry from the hazy juice bombs that have dominated the past couple of years.

This one pours a gleaming copper – clear as anything – with pineapple and candied citrus leading the way on the nose, and a little spruce nudging in from the sides. Light-bodied for its size, ripe paw paw makes an appearance on the palate with a lick of light, sweet caramel for company, while the bitterness is little more than the bit of sticky tape required to hold everything together in what's very much your traditional American-inspired IPA.