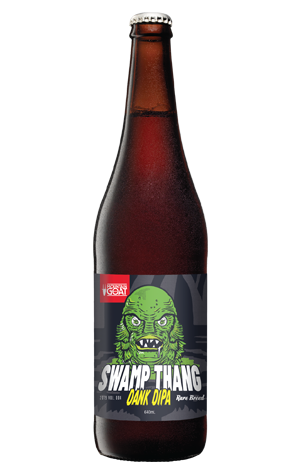 Mountain Goat return to the world of movies – B Movies, in this case – for inspiration for another Rare Breed release. In fact, they've plundered two films, Swamp Thing for the title and The Creature From The Black Lagoon for the imagery on what they're tagging a "Dank DIPA".

To achieve this double D goal, they've loaded the beer with much-hyped new US hop Strata, alongside a trio of other classic Americans and locally-grown Cascade. The tasting notes promise "strong dank, piney notes" but I found it a fruitier beast, perhaps a result of the hops' interplay with not just a Vermont IPA yeast strain and some darker, sweeter specialty malts. Swamp Thang is undoubtedly hoppy as anything, but to this palate offers up the likes of candied red berries, dark citrus and bergamot as much as anything dank alongside the caramel sweetness.

For all that, it's an undeniably big and bold beer, a collision of punchy hops and rich malts, and one lovers of double IPAs will be eager to grapple with.