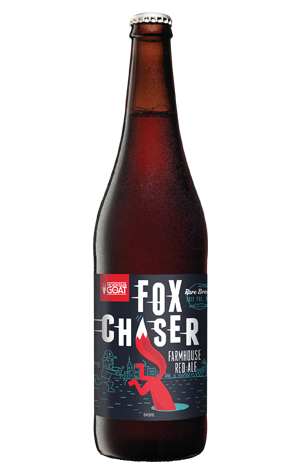 There was a time when it seemed almost every Rare Breed release from Mountain Goat was an IPA of some sort: big, citrusy, even bigger, citrusy of a different kind. You couldn't fault the logic: fans enjoyed them and they helped the brewers on their still-going run of picking up at least one Australian International Beer Awards trophy every year since 2015. But there's been a change of tack in recent months, with their spiced, old school Garage Project collab followed by another spiced, old school release.

Where the former was an imperial stout with its roots in the style's genesis in the UK, here inspiration comes from across The Channel and the dark, spicy farmhouse ales of Northern France. Again, some New World additions make an appearance – French farm brewers might have added whatever they had to hand to their beers back in the day but we doubt that included pepperberry or hibiscus, even if citrus peel would have made an appearance.

That trio of adjuncts represent the trill atop the main score, one provided by a rhythm section of specialty malts, experimental hop variety Hopsteiner $10416 and Citra on lead, and a French saison yeast on bass. A rusty russet colour, the effect of the pepperberry, hibiscus and (especially) the citrus peel is to heighten the characteristics derived from the yeast, adding a lively deep citrus element to both aroma and flavour, and some flighty spiciness to a base beer that's both sweet in the rich caramel sense yet refreshing in its finish. An enjoyable take on the sort of beer we rarely see in the beer world today.

Chase one down with the Mountain Goat beer finder