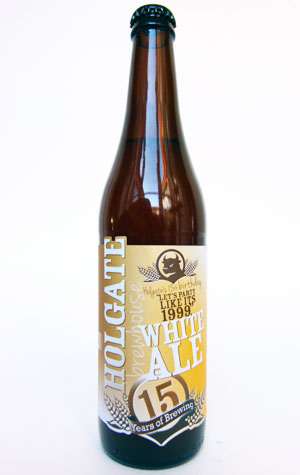 If one thing was clear from the chat we have with Paul and Natasha Holgate when preparing a write up on their recent 15th anniversary was that they've never really done things the easy way but, instead, what they believed was the right way. Their first two releases back in 1999 showed that they'd do what they wanted, with Paul opting to announce Holgate with the Old Pale Ale (now the ESB) and a white ale inspired by Hoegaarden.

While the ESB lives on year round, the White Ale has become a lesser spotted drop but was chosen as the inspiration for the beer to mark the 15th birthday. This time around, they took the base recipe, beefed it up a little and then, to the usual coriander, added heaps of fresh oranges and grapefruits. The result, is a big, hazy yellow fruit cocktail of a beer, juicy in body, aroma and flavour, with the citrus fruits adding to the distinctly spicy and slightly banana-like esters from the yeast. There's some spritzy carbonation to lighten that creamy body with a touch of tartness, rather than bitterness, left to clean up at the end of the party.

Look out too for a limited, draught only run of a Marzen / Vienna lager brewed for the 15th anniversary Oktoberfest. Presumably a descendant of their former, trophy-winning Big Reg it's a bloody delicious drop. A bright auburn pour, it's got the balance of slightly sweet caramel and biscuit malts and soft German hop aromas and drying bitterness just right. If we hadn't been driving on the day of the Oktoberfest we'd still be drinking it now.