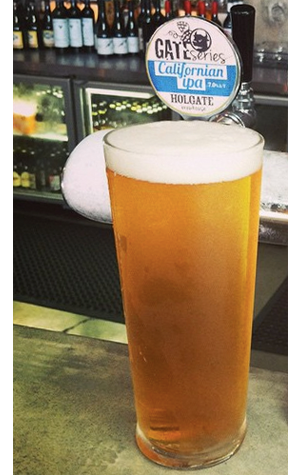 Head brewer Paul Holgate describes the Californian IPA as "a vehicle for our brewers to explore their inner IPA-ness", and have some fun doing 'vertical' tastings of different Holgate versions of IPA all at the same time. He says the aim was to mimic the "strong, bracingly bitter and devastatingly dry" IPAs of West Coast USA, with Holgate's "a hazy golden straw with an aroma full of tight citrus fruit", flavours of "juicy grapefruit underpinned by a slight, aromatic grassy note" with a "strident New World hop bitterness [that] brings the whole picture together".

Meanwhile, the TOPAZ Single-Hop IPA – a 20 kegs only "Tank 9" release (in other words from their experimental "baby" tank, Tank 9, with which brewers are encouraged to "get creative, experiment with new recipes and techniques, trial new ingredients and have fun") – is out from this weekend too. The hop is one that's been around Australia for decades but has enjoyed something of a reevaluation in recent years. Here it's been used at every stage in the brew, with the brewers saying the result is a beer awash with "bright, juicy aromas of orange, mango and ripe pineapple [and] resinous hop oil", "juicy tropical fruit flavours along with pronounced tangy citrus flavours of grapefruit and lime" and "an assertive bitterness, redolent of citrus peel".

All four IPAs (Road Trip, these two and Hopinator) will be on at the Brewhouse in Woodend on the last weekend in November, where you can purchase a tasting flight of four 150ml samples.