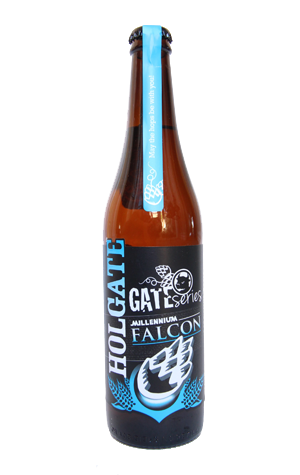 To mark Star Wars Day, Holgate Brewhouse has brought its Millennium Falcon back for another burst of its hopperdrive. The beer started as one of the most punny beers you could ever wish to find; it was the Woodend brewery's 1000th brew and featured Millennium, Falconer's Flight and Galaxy hops. The beer was given even more hops last year for its second tour and has been boosted once more this time around.

What was already a 10 percent "Emprial IPA" has been nudged up to 10.5 percent ABV and, while the IBU level [International Bitterness Units] remains at a palate-pushing 100, the varieties of hops have been increased (well, the bottles do bear a bonus label stating "May the hops be with you"). Among the newcomers to the brew is an array of punchy fruity varieties – Citra, Mosaic and El Dorada from the US and German newbie Mandarina Bavaria – with the result that there's some seriously fruity, citrusy (predominantly orange) action going on. There's the borderline sticky body you'd expect from cramming in so many hops alongside enough pale malt to retain balance and some sweet alcohol aromas and flavours to boot. May the force be with you indeed.