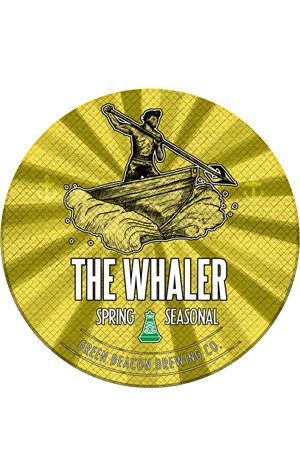 Last year, Green Beacon released The Whaler as its spring seasonal. Taking inspiration from the tale of a ship, the Duke of York, that, in the 1830s, having been repurposed as a whaler, turned out to be rather useless. On its maiden whaling voyage it was wrecked north of Moreton Bay without catching a single whale.

The 2014 Whaler celebrated the moment via the means of a zesty golden ale. This time around, they've decided to step things up. In comes new American hop Azacca (joining country fellows Cascade, Chinook and Amarillo), which we're told gives the beer a similar grapefruit character to last year's beer. It's joined by more booze, unmalted wheat to add body and blood orange juice.

The outcome is a cloudy pale yellow IPA with aromas of "fresh blood orange and yellow grapefuit" and flavours of "intense tropical fruit up front" plus "hints of coconut and a smooth, creamy finish".