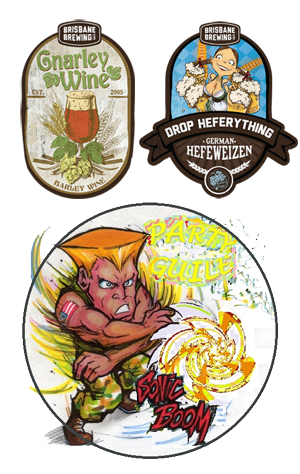 One of the advantages of having your own brewpub – particularly one that's attracting plenty of customers (not to mention having a second venue, as is the case here) – is the freedom to brew as many beers as you like. You don't have to come up with packaging for them (beyond a decal or chalk scribble on a board), you've got regulars coming through the doors looking for something new and, chances are, your brew length is such that even if a beer moves slowly you've not got a huge amount to get through.

Perhaps that's why Brisbane Brewing Co's latest beer update contained not one, not two but three new brews. Among them is Gnarley Wine, the biggest beer they've ever brewed, registering a sizeable 11.6 percent ABV. It comes with the sort of tasting notes that suggest a couple may have been consumed before hitting "Print", from which we can ascertain that malts are of the "rich, biscuity, and nautical nutty" sort, there's some spicy booze, and "sweet caramel, orange skins, peanut and plum" to boot. Only one way to find out if they're right.

The second new beer on tap is its little sibling, with Party-Guile Sonic Boom being brewed with the less potent sweet wort left over once the liquid that would become Gnarley Wine had gone its merry way. Said leftovers were allowed to sour using lactic bacteria, before being boiled and then fermented as per usual. The result here is "a refreshing tartness ... with minimal contribution from hops or yeast and a pleasing background malt character."

Bringing the trilogy to a close is the returning *Hefe'rything**, the brewpub's take on the classic Bavarian hefeweizen. Look out for banana and clove yeast characters and a "hint of bitterness" from the "ever-so-slightly citrusy Tettnanger hop".