Walk past 124 Boundary Street in Brisbane’s West End and you’re met by an ornate set of iron gates featuring intricate hop bines and cones. Eye-catching, for sure. But it’s what lies beyond that is likely to please you rather more.

The team behind Woolloongabba’s Brewhouse Brisbane – since renamed Brisbane Brewing Co. Woolloongabba to cement the relationship between the two venues – worked wonders with their new venue, Brisbane Brewing Co. Pass under the gates and you're led to a courtyard with a welcoming laneway vibe that's one of the most enticing spots to relax once the sun disappears, aided in no small part by delicately poised fairy lights that soften the harsh West End bustle coming from yonder.

That's just the start, however, as the courtyard opens up into a small, open air expanse before you encounter the motherlode: the brewpub that has to be one of the most visually appealing in Australia.

Once inside, it’s easy to forget that just moments prior you were standing on Boundary Street. Soft lighting, timber, black and white floor tiles, a polished concrete bar top and strategically placed foliage combined with the tried and trusted formula of exposed brickwork make the decor simply work, while the warming teal paint covering the wooden cladding is the venue's defining flourish. There’s no doubt about it: Brisbane Brewing Co's terrific use of space emits a class unrivalled by most of its peers.

In plain sight is the working brewery itself – set back to one side behind a glass partition – with bright beer tanks located in a purpose-built cold room. They're connected straight to the taps at the bar, offering customers the chance to sup some of the freshest beer in Brisbane.

The taps feature the Brisbane Brewing Co and regularly rotating small batch offerings, while from 2022 a selection of their beers are now available in cans. First to make the transition was the Walker IPA, soon joined by their Brisbane Pale Ale (BPA) and Brissy Lager.

Aside from the delicatessen offerings, the modern food menu boasts larger options too such as share plates, beef brisket, beer battered barramundi and arguably Brisbane's best chicken parmigiana plus vegetarian options and an extensive dessert menu.

Brisbane's West End (and the adjoining parts of the city) is awash with great beer venues these days. Heck, there are even breweries that call the 'burb home. So we made the area a focus of a Crafty Crawl – and have since updated it with even more goodness.

17 Years Of The Brisbanest Beers

You'll find breweries in most parts of Brisbane these days, but long before the city's craft beer scene exploded a young couple decided to open a brewpub in the CBD. Seventeen years on, we joined them for a trip down Memory Lane. The BPA, or Brisbane Pale Ale, is the brewery's take on the Australian pale ale style and uses that most famous Aussie hop, Galaxy, with its tropical characters providing a wonderful way to compliment a warm Brissie day. There's a herbal quality to it too, and a lingering, resinous bitterness, the result, we're told, of the use of whole hop flowers infused into the beer via the brewery’s secret weapon: resident “Hopback” - Henry the Hoptapus.… Read more
Rich Brown Another beer to pay homage to their hometown is Brisbane Brewing's resident lager. It takes its lead from the lagers of Germany by combining noble hops with a soft pilsner malt body to create a zesty, lean and crispy beer with a light bitterness.… Read more
Golden Yellow This award-winning beer is Brisbane Brewing Co's take on a West Coast IPA style. And as we didn't appear to take any tasting notes for it when we called in, we'd best go with the brewer's: "Big on flavour, dry-hopped with classic American hops, with Columbus at the forefront. A hop-fest, resinous beer with plenty of pine and citrus notes, complemented by a light, dry finish."… Read more
Golden 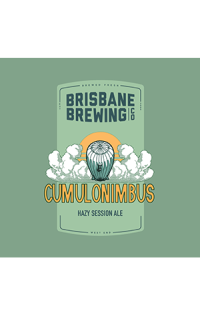 Once upon a time, Brisbane Brewing's core range included a midstrength golden ale but with that style having largely disappeared, the brewery added a session NEIPA instead. Cumulonimbus is named for a type of dense cloud formation and like its aeronautical namesake, the beer is hazy and smooth but unlike a cloud (we assume anyway) it also contains a light floral aroma and citrus kick.… Read more
Pale Yellow Brisbane stalwarts Brisbane Brewing Co celebrated a significant milestone this October, releasing the 500th beer brewed in their West End brewery in the shape Walker Double Roundhouse Kick, an imperial IPA that clocks in at a hefty 11.8 percent ABV. Fans of BBCo will recognise the Walker name from their award-winning Walker IPA, with the Double Roundhouse Kick taking everything the BBCo team love about Walker and the quintessential late 90s/early 00s, classic West Coast IPAs it's modelled after,… Read more
Golden 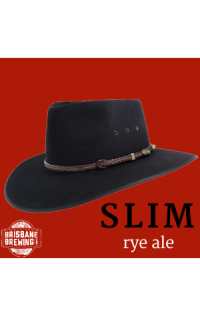 Sometimes you need a beer that’ll be gentle to you, like your favourite battered Akubra protecting your eyes from the harsh sunlight, or the quiet thrum of plucky guitar strings offering your ears some relief from the noisy world. Sometimes you need a beer that won’t make you fall off your stool. A beer for when you’re feeling a bit dusty. Say hello to Slim. He’s a rye pale ale crooning at an easy 2.8 percent ABV. Hold him up to the light and you’ll see the coppery tones shining through,… Read more
Golden Dark beer lovers have a dilemma in Queensland. We love our porters and stouts, and they go down perfectly in winter… but there’s an extra level of dedication needed to knock back a pint of 6 percent (or higher) chewy stout in 33 degree heat and high humidity. BBCo’s answer isn’t to invent a new style, but to go back to an often underrated classic style: the dry Irish stout. Their version, My Shout, is the perfect year-round dark beer. Just like its famous big brother from Ireland, this beer… Read more
Black Want a beer to really make you feel good in the summer heat? BBCo has kettle-soured a wheat beer (using lactobacillus plantarum) and infused it with a bucketloads of strawberries from LuvaBerry. LuvaBerry gathers all those weather-damaged (but perfect tasting) strawberries that would otherwise go to waste and freezes them to be used by forward-thinking companies like BBCo, who used theirs in a beer (obviously). Half of the strawberries were introduced to the boil, with the other half being added… Read more
Red With possibly the best beer name in history, Putin On The RIS is an imperial stout to sip, savour and salute. BBCo bring this monster back year after year, along with barrel-aged variants, and it never disappoints. It’s thick and syrupy as motor oil, coating the tongue and carrying layer upon layer of complexity. Full, almost savoury, flavours of roastiness, liquorice and cocoa bitterness blend with the sweeter and stickier notes of chocolate and dried dark fruits. Coffee and boozy warmth come… Read more
Black One of the advantages of having your own brewpub – particularly one that's attracting plenty of customers (not to mention having a second venue, as is the case here) – is the freedom to brew as many beers as you like. You don't have to come up with packaging for them (beyond a decal or chalk scribble on a board), you've got regulars coming through the doors looking for something new and, chances are, your brew length is such that even if a beer moves slowly you've not got a huge amount to get… Read more
Golden The light beer in Brisbane Brewing Co's range is a summer ale with "a nod to its English heritage" brewed with five different specialty malts and three hops. It's a lightly fruity, grainy affair with a reasonably high bitterness for a low ABV beer.… Read more
Golden Described as "a contemporary Australian take on a classic style", BBCo's honey wheat features more than 50 percent wheat in the malt bill and honey that adds to the malt sweetness of the beer. There are light esters on the nose – the brewer reckons in the form of "hints of orange, musk and jasmine tea", while there's a fruitiness at play from the yeast too in a beer that finishes dry.… Read more
Pale Yellow