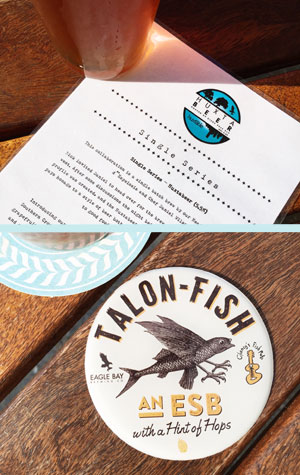 They love a collaboration at Eagle Bay (and we're pretty sure they don't struggle to entice potential collaborators to their beautiful home on the northwestern tip of the Margaret River region either).

They've got two more out now, including Huxtabeer, which was brewed with the man behind Melbourne restaurant Huxtable and burger chain Huxtaburger, Daniel Wilson, when he was over for the Gourmet Escape. It's a "hopped up" pale ale brewed with fruity New World varieties Southern Cross, Centennial and Simcoe that we're told delivers "loads of lemon and grapefruit on the nose and the palate". There's a touch of rye spice in there too and an "oh-so-tasty bitterness to finish".

The second collab is Talon Fish, which was created with the crew from WA's quality beer and fish venues, Clancy's. Staff from all four venues headed to the brewery to make 800 litres of what they're calling a hopped up take on Eagle Bay's ESB (Extra Special Bitter).