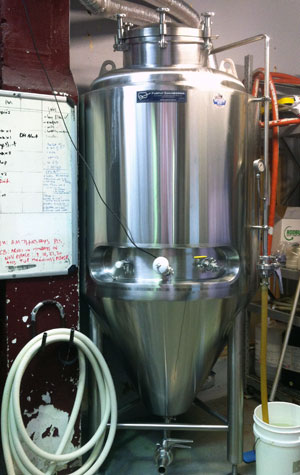 Poor Tank 9. It's the smallest of all the tanks at Holgate's brewery yet it seems to take a terrible pounding as the home of their experimental releases. Then again, maybe it's the happiest tank in the land, eagerly waiting to see what variety of sugary, hoppy wort will next fill it from the boots up, ready to be feasted on by happily munching, multiplying and farting yeast. If only tanks could talk, hey?

The two latest beers to have undergone gestation within the stubbornly mute cylinder of stainless steel include a Saison. It's a beer style originally brewed by farmers to keep their lusty farmhands happy in northern reaches of France, inspiring the brewers to describe it as "the colour of sunshine and straw bales". They say to look out for "complex, yeast-derived peppery spice and banana with a touch of herbal hop character", not to mention a "mid palate that's a pillow of soft, sweet malts and zesty citrus with a balanced bitterness that gives way to a bone dry, mineral finish" too.

The other new release from within is Alpha Crucis. It's not technically new new as the first batch came out last year. What it definitely is, is an Australian IPA brewed with all Aussie hops and malt. It follows single hop IPA experiments featuring Topaz and Vic Secret and adds some Ella and Galaxy hops as well, all atop a "very simple" malt bill. The resultant beer "sings of sweet tropical fruits and zingy citrus – think pineapple, mango, lemon and grapefruit", which sounds delightful (unless you don't like fruit, of course). At just 5.1 percent ABV and with, we're told, a restrained bitterness, it's an IPA designed for revisiting.