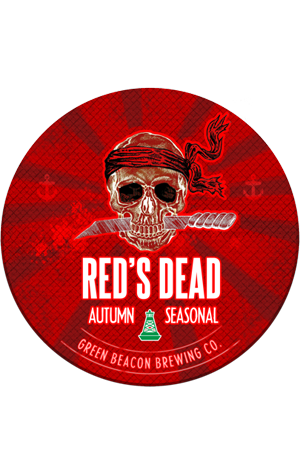 The brewers at Green Beacon have been favouring hops when it comes to their seasonal releases in recent times. And that's not about to change with Red's Dead. Following the Uppercut Imperial IPA, Whaler 2015 blood orange IPA and the Grappler reworked into a New World Pilsner, it's what they're calling a "West Coast Red Ale". What that means is enough specialty malts to make sure it's red and heaps of US hops.

The hops come in the form of Cascade, Columbus, Azacca, Citra and Simcoe and are added in the kettle, whirlpool, hop back and fermenter. Don't be surprised if someone from the brewery pops up and drops a hop flower into your glass just as you're about to take a sip.

They tell us that the outcome of this endeavour is a beer that's "dark crimson red", offers aromas of "toasted malt, fresh citrus, tropical fruit and pine" and flavours that kick off with sweet caramel before "juicy fruit flavours and tropical hop bitterness accompanied by hints of resinous pine" join the fun.

Launched at the brewery on February 26 and out around SE Queensland from March 1.

The Mill (Tapped during Brewsvegas)

And select beer venues on tap and in growlers