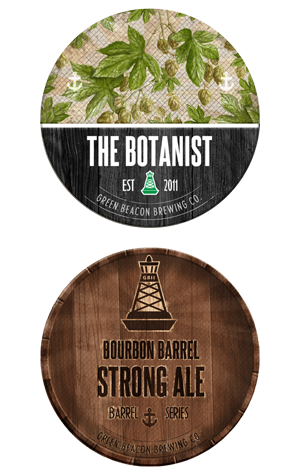 Two new releases in the same week for Brisbane's Green Beacon – and they couldn't be much more different if they tried. First to hit taps is The Botanist, their 2016 wet hop ale, featuring Galaxy and Ella hops air freighted to the brewery from Tassie within a day of being picked. They've been added at four different stages to an otherwise pretty straightforward American style pale ale in order to allow the hops to shine, with the brewers describing the aromas as "green and grassy with hints of rock melon, passionfruit and citrus" and the flavours as "fresh and juicy with mouth-coating resinous flavours of citrus and passionfruit".

Following The Botanist onto taps at the brewery from April 15 then elsewhere later is the brewery's first foray into the world of barrel aged beers. The Bourbon Barrel Strong Ale saw an American style strong ale spend time inside barrels from Heaven Hill in Kentucky (the same source for some of the barrels for last year's Boatrocker Roger Ramjet). The result sounds like quite the complex beast: "aromas of coconut, bourbon and dark chocolate followed by sweet malt flavours up front and rich notes of chocolate, coconut, oak, raisins and bourbon". Blimey!