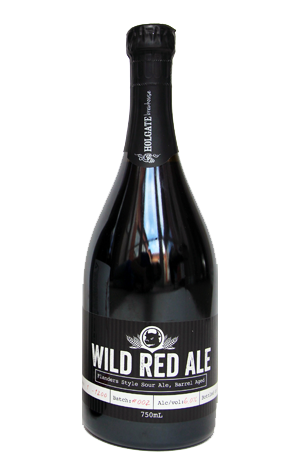 At March's Good Beer Week Gala Showcase, a brewer who's never shy with his opinions approached with what can only be described as the zeal of a zealot – yes, that much zeal.

"Have you tried the Flanders Red yet?" he demanded.

"The Boatrocker one? Yeah, it's good but pretty straight up and down compared to some of the beers they've done."

"No! Holgate. They've got a few bottles under their bar. It's probably the best Australian beer I've had in a year."

Seventeen seconds later: "I hear you've got something special under the bar..."

It's fair to say the zealot's zeal was well placed. Were one to be given a glass of Holgate's Wild Red, their take on the Flanders red style of beer made famous by Rodenbach, and a glass of said Belgian brewer's iconic Grand Cru you'd be hard pressed to pick a favourite. The local version – the result of them ageing and souring a rich red ale in a variety of barrels, then sampling from each over time, working out which were the best, then blending them – is genuinely fantastic. It achieves the complexity that makes the style, and not just in combining the sweet from the malts, the sour from the bacteria, the character of the oak and a balsamic like acidity through both flavour and aroma; they've achieved complexity of texture too.

If you care even a little about trying the best beers to come out of Australia, you should make sure you get your hands on one of the 1,200 bottles (not beers as we originally wrote...) they've released, pour yourself and people you really like a glass, let it settle a few minutes like a red wine, then sip, savour and cross fingers they can recreate it again in the future.