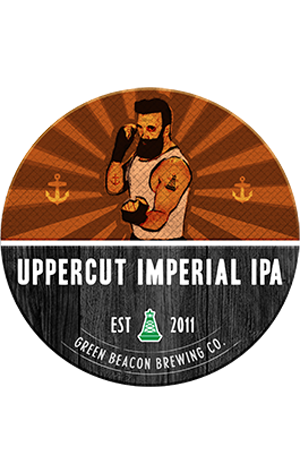 The biggest of Green Beacon's hop forward beers is back for round four. The Uppercut imerial IPA is a seasonal that, as is the Brisbane brewery's wont, tends to change a little with each release. Certain characteristics remain the same: it's always awash with New World hops and it always packs a sizeable boozy punch. This time around, those hops come in the form of West Coast Americans Simcoe, Columbus, Amarillo and Centennial and the boozemeter clocks in at 8.5 percent ABV.

The beer into which they've been liberally dosed – in the mash, kettle, whirlpool, hopback and fermenter – is of the paler ilk favoured by West Coast IPA brewers, albeit with enough sweetness (or care through the brewing process) to keep the bitterness from being of the palate-thwacking nature often associated with such beers. Instead, there's a lightness to the beer, allowing the citrusy, tropical and piney characters to shine unhindered.

NB If you're in Brisbane on July 20, head to the brewery for the beer's official launch.

And select venues around SEQ