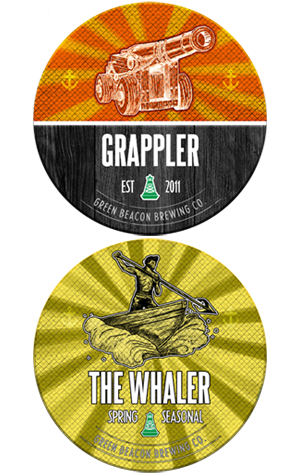 As is their wont, Green Beacon have evolved the latest two seasonals to hit taps from the previous year's models that bore the names Grappler and The Whaler. That said, they're pretty minor evolutions this time around.

The Grappler remains a pilsner and is one that is 100 percent German in inspiration and ingredients (well, bar the Brisbane water). That said, it's a beer that makes a feature of some of the livelier new wave of hops coming out of Germany rather than the older varieties that make classic pilsners what they can be. The brewers opted for Mandarina Bavaria and Hallertau Blanc and reckon they've imparted "flavours and aromas of tangerine, passionfruit and fresh citrus" alongside "complex grainy characters with subtle caramel malt sweetness" from the German pilsner malt.

After the rapturous welcome that the 2015 Whaler received around Queensland beer circles, the 2016 vintage is again a Blood Orange IPA. We're told this one is brewed with "unique American hops hops that exhibit aromas and flavours of grapefruit, mandarin and zesty citrus" and that it's been "supercharged with blood orange juice added post fermentation, for a result that is something truly special".

You can find out for yourself when both are tapped at the brewery on August 26.