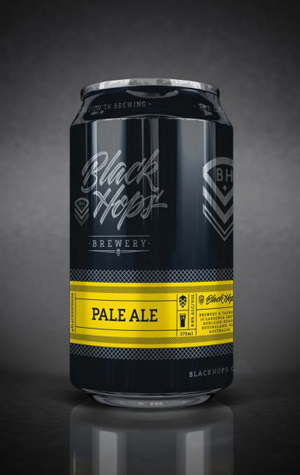 The Black Hops crew of Dan Norris, Eddie Oldfield, and Michael "Govs" McGovern has previously applied the same level of creativity found in some of the brewery's beers – eggnog stout, anyone? – to the beer's names. In keeping with the operation's name and branding, they've co-opted military-inspired beer names, from past GABS beer Assault Trifle to Code Red and Pink Mist.

Yet, with this beer being a pale ale designed to appeal to a broader range of drinkers – as Dan puts it, for “entry level craft beer drinkers” and “jaded craft beer veterans” – out went the clever and in came the straightforward. Welcome... the Pale Ale.

The Pale Ale is also the first Black Hops brew to be canned and first appeared at their taproom in Burleigh at the end of March before sneaking into bars and bottleshops in South East Queensland and Northern New South Wales. It's been designed to be as straightforward as its name, a mix of pale malt and tropical aromas derived from Summer, El Dorado and Simcoe hops. Should you wish to delve a little deeper, however, in true Black Hops style, they've presented a blog post that goes into the fine detail of the design of the cans and beyond.