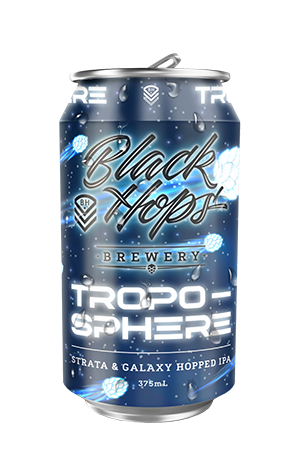 Black Hops Brewing’s November limited release IPA is one destined for the stratosphere, with the 6.9 percent ABV beer containing both Galaxy and Strata. If you’re reading these words, chances are you’re pretty familiar with Australia’s Galaxy hop and the more recent Strata from America too but if not, here’s a refresher. The former is known most distinctly for its passionfruit flavour along with other tropical fruits such as pineapple, while the latter is often described as a tropical beast too, though it can also push notes of berry and leans a little closer to weed in its dank undertones.

Put together - in the case of this Interplanetary Pale Ale anyway - they definitely provide a wallop of passionfruit and pineapple, which is joined by some softer notes of citrus and berry plus a grass-like dankness. Asides from those flavours from the two hops, there’s also a very soft touch of biscuit from the malt and clean and dry landing to bring you back down to earth.