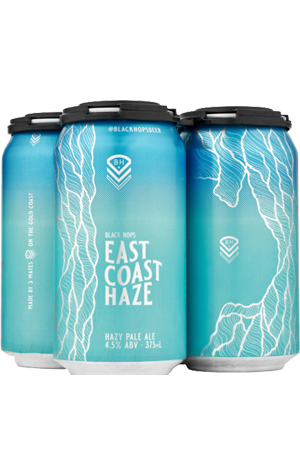 What's in a name? If you delve into the backstory of Black Hops' new (sorta) core range hazy pale, rather a lot. You can check it out on their blog – a tale that takes in weather patterns, surfing, plenty of discussions, a name change, and now a big campaign to push what's kinda G.O.A.T.'s little sibling to a wider audience.

We've looked at the growth in popularity of hazy pales a fair bit this year – and featured them in a blind tasting too, one in which East Coast Haze's forebear, East Coast Low, wasn't included as it wasn't core range at the time – so where does this one slot in to the fast-growing category? Well, naturally it's pale and hazy, but also more lively and juicy than some we've encountered, yet still possessing a softness of texture.

Given the hops of choice are Mosaic, Amarillo and Eclipse , it's little surprise it's tropical and citrus fruits to the fore – grapefruit and a little kaffir lime are the most obvious for me – and little surprise Black Hops are backing it either.