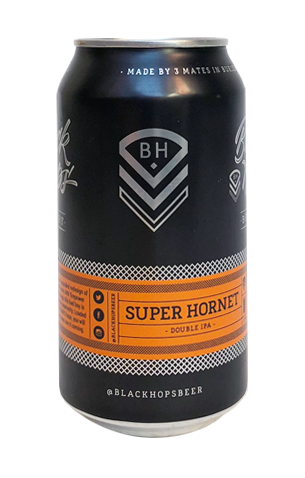 As 2018 draws to a close, the double IPA that's the bigger sibling to Black Hops' core range Hornet, has been given a run in cans. And, for all the attention that's been garnered by NEIPAs and Brut IPAs (and, to a lesser yet still considerable degree, milkshake IPAs) this past year, the arrival of Super Hornet is the latest in a pretty steady stream of such beers to have come our way, suggesting that, for all the fascination with outrageous fruit salads and low bitterness, there's still an appetite for bigger IPAs the way they used to be.

Super Hornet comes with a flash of bold orange that could either be read as an indication of the colour of the liquid inside or something of a warning that's there's a big-hitter awaiting the drinker. We'll go with both, with this DIPA, like many of its recent forebears from Aussie brewers, coming with a decent portion of specialty malts that take it into copper country and away from lean, dry, pithy hop territory into a space where the key players dance a tango on equal terms. That said, the biscuity malts are there merely to add balance and a little weight as the mélange of hops delivers aromas of the tropical and piney kind and plenty of clean, fruity flavours too.

It's such a well judged beer, I jotted "tasty little package" in my tasting notes. Then, as eyelids became slightly heavier after just the one can... "maybe less of the little."

UPDATE: As of May 2019, Super Hornet has joined the core range.

Use Black Hops' beer finder to assist your search