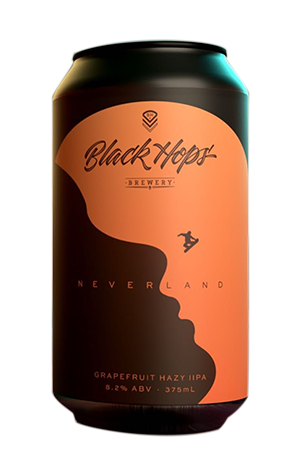 They certainly love their IPAs at Black Hops, with the Gold Coast brewery holding multiple in their core range and regularly letting new ones fly out as limited releases. Joining the fray is Neverland, a grapefruit hazy IIPA that was originally brewed as BHII taproom manager Jesse’s staff beer. Normally the Black Hops staff beers stay inside the four walls of one of the brewery’s two (about to be three) homes but Neverland proved a popular one and has been given a much wider release as a result.

It pours a pale yellow haze but, more appropriately, you could call it a place between sleep and awake, given the beer’s Peter Pan-inspired name and accompanying copy. Featuring the American hop combo of Citra, Amarillo and Apollo plus New Zealand’s Taiheke, it’s a 8.2 percent ABV drop that’s balanced in both flavour and drinkability. One the flavour front, it packs a wallop of grapefruit and some mandarin and gives up a resinous, oily finish before the beer's slight bitterness sinks in and helps you drift off to the land of Never Never.