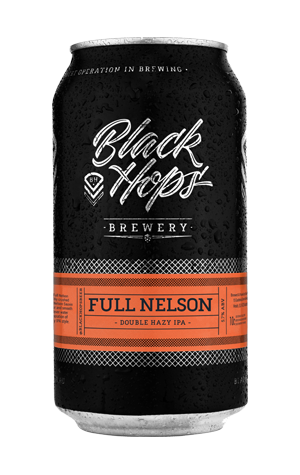 The Full Nelson comes out grappling from the outset, with dank hop sweetness and subtle notes of pepper on the nose. With a big, juicy punch upfront, the beer tightens its grip with a lingering bitterness set against a slightly sweet malt backbone that works hard to hold all 7.4 percent ABV of hoppy liquid together. The finish is surprisingly dry for a hazy IPA, hinting at the latter part of the hop variety's name, Sauvin, which denotes its likeness in flavour and aroma to the sauvignon blanc grape variety.

An eccentric and bold brew, the Full Nelson is a beer that can easily hold you down for the count, but one that will have you yearning to unlock the complexity of the hop profile so as to enjoy the wild ride from start to finish. For those unwilling to surrender themselves to a Full Nelson, Black Hops have also brewed Half Nelson, described as its little brother, with a lower ABV and slightly less haze.

Both Full and Half Nelson are available in a mixed 16-pack at select retailers and individually at good beer spots where you usually find Black Hops.