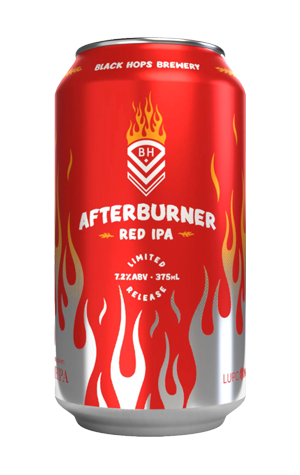 Black Hops already have a fine hoppy red in their lineup, the American red ale Code Red – a beer that's not been shy when it comes to picking up awards. But it seems there's room for another before 2021 is over: their last limited release for the year is Afterburner – a Top Gun-referencing red IPA that's also featured in Hop Products Australia's Lupomax mixed packs.

The liquid pours a deep blood red – certainly many a shade darker than the cans – and brought to mind hikes deep into the bush. Picture yourself a few hours in, requiring a little sustenance, stopping for a restorative snack in the middle of a pine forest. You reach into your rucksack, pull out a calorific and dense syrup sponge slice you'd soaked in a mixed berry reduction before departing, take a big bite and wash it down with a swig of cola. Now, it's arguably not the healthiest way to reboot yourself for the remainder of the hike, but it is where my mind wandered while pondering Afterburner's appeal.

It's well put together, full of flavour and with nothing out of place. Just as we've come to expect from Black Hops in recent years.