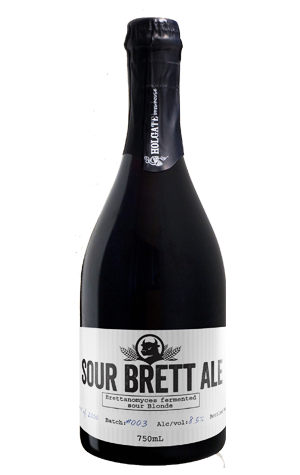 While this year's take on Holgate's acclaimed Wild Red Ale continues to take shape in barrels, the brewery has added another, very different, sour beer to its occasional specialty release lineup. The Sour Brett Ale is one that was developed in far less time and hasn't spent any time on oak; instead it's the result of the brewers playing around with a range of yeasts and bacteria.

A couple of strains of the once feared, now adored Brettanomyces yeast were cultured up in two of the brewery's smaller tanks, while a simple base beer was soured in the kettle with lactobacillus and pediococcus before all were combined. Given all that's at play, the outcome isn't as weird or funky as you might expect. The hazy pale beer has a full, nigh on creamy body and offers up a range of soft fruity characters with the funkier and acidic elements in support rather than dominating. As one member of the Crafty team put it, the sourness "ever so slightly turned up the sides of my tongue".

You'll find it in numbered 750ml bottles and on tap.

And select venues in VIC & QLD