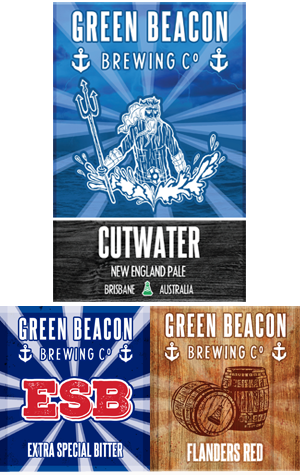 Given they've been busy building and starting brewing on a second production facility, winning champion trophies and touring the country with their beers, it's a wonder the team at Green Beacon has had time to create one new beer let alone multiple. But there's a trio that have hit taps in recent days and another seasonal on the horizon.

Among that trio is Cutwater, a 5.2 percent ABV New England style pale developed over the course of a number of single keg releases at the brewpub. Now hitting taps nationwide, we're told it's: "Vibrant in colour with a cloudy appearance resulting from the use of English ale yeast" with "select American hops providing tropical fruit aromas and flavours and lupulin powder offering ripe/juicy fruit characters without too much bitterness."

Also new on tap is their ESB, a 5.6 percent ABV Extra Special Bitter brewed with specialty malts out of the UK. Described as "everything you would expect from a British pale ale, with a bit of a Beacon twist" they say to expect "biscuit, caramel and roasted malt flavours upfront with earthy, floral and citrus hop characters following it up."

The Flanders Red is an 8 percent ABV beer that made our Best New Beers of 2017 – So Far Queensland lineup. It started out as a Belgian style red ale that was aged for more than 16 months in ex Penfolds Shiraz barrels and inoculated with a lambic culture. The resulting beer is described as reddish brown with aromas of "red fruits, oak and a hint of Shiraz", "rich, complex" flavours of "cherry, cranberry, red grape and oak tannins are dominant" and "a balanced sweetness, acidity and tartness [that] help to round out the beer."